SamJam: Rana Daggubati Breaks Down As He Opens Up About His Health Conditions, Tells Samantha Akkineni That There Were ‘30 per Cent Chance of Death’ (Watch Video)

While the entire episode looks quite lively, the promo of the show also had Rana Daggubati getting teary-eyed. It so happened that Samantha and Rana get talking about the actor's health. 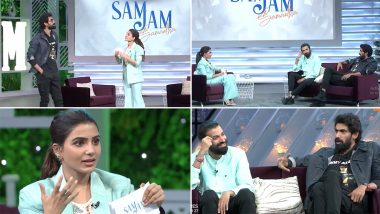 Samantha Akkineni is making sure she invites the best of the south industry on her chat show Sam Jam to keep the fans hooked to it. After Vijay Devarakonda, the actress will now be hosting the Baahubali star Rana Daggubati on the show. The two along with Nag Ashwin will be talking about films, their personal lives and more. Baahubali Star Rana Daggubati to Show His Comic Side in 'Welcome To New York'.

While the entire episode looks quite lively, the promo of the show also had Rana Daggubati getting teary-eyed. It so happened that Samantha and Rana get talking about the actor's health and he is not able to control his emotions while talking about this tough phase of life.

In the promo, we see him saying, "When life was on a fast forward, there was suddenly a pause button. There was bp, calcification around the heart and you have failed kidneys...It could have been a 70 per cent chance of stroke or haemorrhage and a 30 per cent chance of death straight.” Samantha and many fans also become quite sad hearing Rana tell this tragic story. Rana Daggubati-Miheeka Bajaj Wedding First Pics Out: The Couple Looks Royal In Their Traditional Decko!

Check Out the Promo Here:

Here's a glimpse into Episode 2 of #SamJam!

Earlier this year, rumours had it that Rana was undergoing a kidney transplant. Dissing the rumours, Rana had told, “I think there was enough speculated about it and I am tired of clarifying that I am absolutely fine and healthy. So, I think rumours about my health are now a boring topic. Whenever I leave Hyderabad, people get apprehensive, but I am thankful for the love and the concern people have been showering on me.”

On the work front, Rana is gearing up for the release of his upcoming trilingual Haathi Mere Saathi titled as Aranya in Telugu. He also got hitched to his girlfriend Miheeka Bajaj in Hyderabad in August.

(The above story first appeared on LatestLY on Nov 23, 2020 07:11 PM IST. For more news and updates on politics, world, sports, entertainment and lifestyle, log on to our website latestly.com).