Shekhar Suman was livid on Twitter when a news channel's social media post wrongfully claimed that Adhyayan Suman has committed suicide. The actor slammed the news channel and has even ripped apart their bid at an apology. He is thinking of taking a legal course. 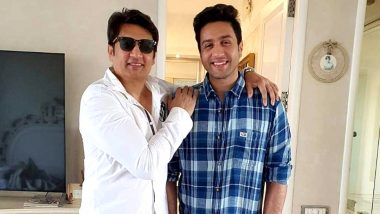 Shekhar Suman was in for a rude shock two days back when a social media post of a leading news channel claimed his son Adhyayan Suman has died by suicide. At a time when many in the industry are choosing the path to end their lives due to various reasons, this is capable to wreck havoc in any parent's life. A miffed Suman took to Twitter to talk about the blunder. It seems a journalist apologised for the mistake but he isn't taking it lying down. He has vowed to take legal action against them. Shekhar Suman Urges Everyone to Light a Diya This Diwali in the Memory of Sushant Singh Rajput (Read Tweet)

Suman writes, "Yesterday @ZeeNews  acted unpardonably irresponsible and sent out a piece of news that devastated me, my wife and my family members .My wife was inconsolable as they announced that Adhyayan Suman has committed suicide. Adhyayan was in Delhi." We can only imagine how devasted they might have been after reading about it.

Suman hits out at the channel for such a monumental mistake.

Yday@ZeeNews sent out a piece of news which devastated all of us.They said that Adhyayan Suman has committed suicide.Adhyayan was in Delhi and was unreachable and we all died a thousand deaths.Such a shocking news cld have had a disastrous effect.

While I'm taking legal action against them and suing them for such a reprehensible act.The media ought to be more responsible and not jeopardize ppl's lives and destroy them for their own vested interest.i request ev one to tweet and ban @ZeeNews

We are aghast and still not come out of the shock.I request ev one to tweet against such an unpardonable behavior of @ZeeNews and ban the channel lest it happens to anyone https://t.co/tf2uzjnsLz going ahead and taking a suitable legal action them. pic.twitter.com/vqpZAkI0H7

Some random apology by one of @ZeeNews regular journalists is not accepatable for such an unpardonable act.The bosses shld have some shame and own up to their faux-pas which is deplorable.Imagine if they had done the same to any of the political big-wigs.

Their license wd be canceled.The PM has clearly stated that ppl behind fake news that can cause extensive damage in many ways shld be punished.@PMOIndia @PrakashJavdekar @ZeeNews

Shekhar Suman has often been vocal about the ways of the industry especially after the demise of Sushant Singh Rajput.

(The above story first appeared on LatestLY on Feb 22, 2021 01:25 PM IST. For more news and updates on politics, world, sports, entertainment and lifestyle, log on to our website latestly.com).