Sonakshi Sinha Now Owns a Plush 4 BHK House in Bandra, Calls It a ‘Dream’ She Wanted to Fulfil

Sonakshi has chosen one of the poshest locations in Mumbai for her house. The 4BHK apartment is located in Bandra Reclamation. She is currently staying with her family in a bungalow located in Juhu. 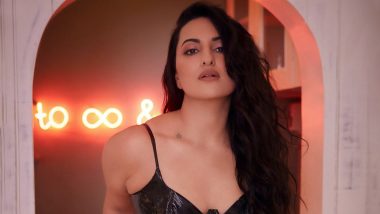 Bollywood stars love to invest in real estate and recently we saw many stars get new homes and offices in lush area around Mumbai. Alia Bhatt bought her own space and office last year, Janhvi Kapoor is also said to have bought a lush apartment in Juhu. Adding to this is the Dabangg actress Sonakshi Sinha. The actress has just bought her own space and is now an owner of a plush 4BHK house in Mumbai. Sonakshi Sinha Funny Memes Take Over the Internet After She Fails to Answer a Simple Question on Ramayana in KBC 11.

Sonakshi has chosen one of the poshest locations in Mumbai for her house. The 4BHK apartment is located in Bandra Reclamation. She is currently staying with her family in a bungalow located in Juhu and plans to continue to live with them. Talking to Pinkvilla, she said that she only brought the house because it was one of her dreams to own her own space and having bought the house only fulfilled her dream.

She said, "Ever since I started working, it was my dream to buy my own house with my hard-earned money before I turned thirty. I may have crossed that deadline by a couple of years but it's finally happened. I enjoy living at home with my family and have no plans of moving out anytime soon. This house was me just fulfilling a dream and a great investment.” Sonakshi Sinha Sends Out A Strong Message On Body Positivity As She Turns Cover Girl For Cosmopolitan’s Latest Issue.

On the work front, Sonakshi was last seen in Dabangg 3 with Salman Khan. She will next be seen as social worker Sunderben Jetha Madharparya in Bhuj: The Pride of India featuring alongside Sanjay Dutt, Nora Fatehi, Sharad Kelkar, Ammy Virk and Pranitha Subhash. The film is a biographical war action film directed, co-produced and written by Abhishek Dudhaiya.

Set during the Indo-Pakistani War of 1971, the film is about the life of IAF Squadron Leader Vijay Karnik, the then in-charge of the Bhuj airport, who and his team reconstructed the IAF airbase with the help of 300 local women. The film will premiere on Disney Plus Hotstar but the release date of the film has not been revealed yet.

(The above story first appeared on LatestLY on Jan 23, 2021 03:24 PM IST. For more news and updates on politics, world, sports, entertainment and lifestyle, log on to our website latestly.com).