Sunny Leone, Arjun Rampal to Star in Period Drama Based on the Battle of Bhima Koregaon

Sunny Leone plays a spy who poses as a dancer in the upcoming historical film, The Battle Of Bhima Koregaon. The film, set between 1795 and 1818, also features Arjun Rampal as a Mahar warrior. 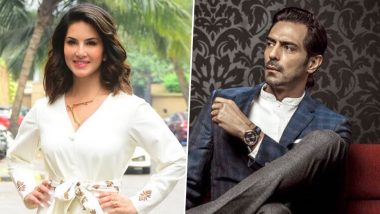 Sunny Leone plays a spy who poses as a dancer in the upcoming historical film, The Battle Of Bhima Koregaon. The film, set between 1795 and 1818, also features Arjun Rampal as a Mahar warrior. The film's lyricist, producer and director Ramesh Thete is not very keen to reveal too many details about Sunny's role. "She plays a spy who poses to be a dancer," is all that Thete said for now. Arjun Rampal Feels Nail Polish Is One of the Top Three Films on His List of Work That He Feels Proud Of

On Rampal's character, Thete told IANS: "The personality and physique of Arjun Rampal is perfect for Sidhnak, the Mahar warrior. He is the protagonist of a rare kind who carries the narrative of the untouchables well. Arjun was the fittest actor for the role." Mahar soldiers were said to be part of the British troops that fought against the Peshwa Bajirao II's army in the Koregaon Bhima battle on January 1, 1818. Nail Polish Trailer: Arjun Rampal and Manav Kaul’s Courtroom Drama Is Intense and Twisted (Watch Video)

"'The Battle of Bhima Koregaon' symbolises the merit, sacrifice and valour of the depressed sections of the society that were deprived of the right to equality who fought fearlessly against the oppressors," said Thete, who chose the subject as he wants people to know their history well and get inspired by it. The film also stars Digangana Suryavanshi. It is expected to release in the second half of 2021.

(The above story first appeared on LatestLY on Dec 10, 2020 07:32 PM IST. For more news and updates on politics, world, sports, entertainment and lifestyle, log on to our website latestly.com).