Vicky Kaushal-Katrina Kaif Wedding: Venue, Dates, Guest List and More – All You Need To Know About the Couple’s Destination Shaadi!

As Vicky Kaushal and Katrina Kaif are reported to tie the knot in a grand ceremony in Rajasthan on December 9. Here are all the deets you need to know about the couple’s big day. 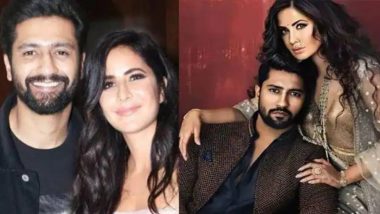 All eyes are on Vicky Kaushal and Katrina Kaif's December wedding, as the pair is all set to enter wedlock soon. Even though VicKat has yet not announced officially about their shaadi, but rumours are strong enough. Right from the bride-to-be getting clicked at a clinic to the groom leaving his to-be wife's residence at midnight, the internet is filled with such juicy gossip about the duo. Also, there has been a lot of buzz about the outfits, venue, stylists, guest list, and more related to Vicky-Katrina's wedding. And so to make it easier for you, here we bring to you all the deets about Katrina and Vicky’s wedding. Vicky Kaushal-Katrina Kaif Wedding: Bride-To-Be Obliges Fan With a Selfie As She Gets Clicked in the City (Watch Video).

As per reports, Vicky Kaushal and Katrina Kaif are legally married as they had their court wedding on December 3, in Mumbai. The two have been already pronounced as husband and wife under the Special Marriage Act, 1954.

VicKat are all set for a destination wedding. If the reports are to be believed then the couple will be getting married in a grand ceremony in Rajasthan. Also, just like any other Indian wedding, their shaadi will also have a three-day extravaganza with sangeet, mehendi, and wedding on December 7, 8, and 9 respectively.

Vicky Kaushal and Katrina Kaif’s traditional marriage will take place in Six Senses Fort in Barwara, Rajasthan. While we have seen many celebs picking an exotic international location for the D-day, for Vicky-Kat it's going to be India itself.

Vicky Kaushal and Katrina Kaif’s wedding guest list has been a hot topic of discussion. However, we hear the tentative attendees at the wedding include many celebs such as Karan Johar, Ali Abbas Zafar, Rohit Shetty, Sidharth Malhotra, Varun Dhawan, Anushka Sharma and more. It's also said that the wedding will have a no-phone policy.

Well, what Katrina is going to wear on the wedding day is still kept under the wraps. However, it's reported that she is going to don an Abu Jani attire for her mehendi, a Manish Malhotra lehenga for the sangeet and, Gucci for the reception. Vicky Kaushal, on the other hand, is said to opt for Kunal Rawal and Raghavendra Rathore’s designs for mehendi and sangeet. Vicky Kaushal – Katrina Kaif’s Wedding: Packages Get Delivered at the Actress’ House Hinting That the Shaadi Preps Have Begun.

These days themes play a crucial role at a wedding and VicKat also have planned themes for their pre-wedding festivities and D-day. Reportedly, for mehendi it's going to be gold, beige, ivory and white theme, bling is for the sangeet whereas pastel sorbet is said to be the theme for the wedding. As per reports, Katrina Kaif and Vicky Kaushal's pheras will take place in a royal mandap.

That's it, guys! These are some of the topics which have been trending with regards to Katrina Kaif and Vicky Kaushal's wedding. Are you excited? Tell us in the comment section below.

(The above story first appeared on LatestLY on Dec 05, 2021 07:49 PM IST. For more news and updates on politics, world, sports, entertainment and lifestyle, log on to our website latestly.com).