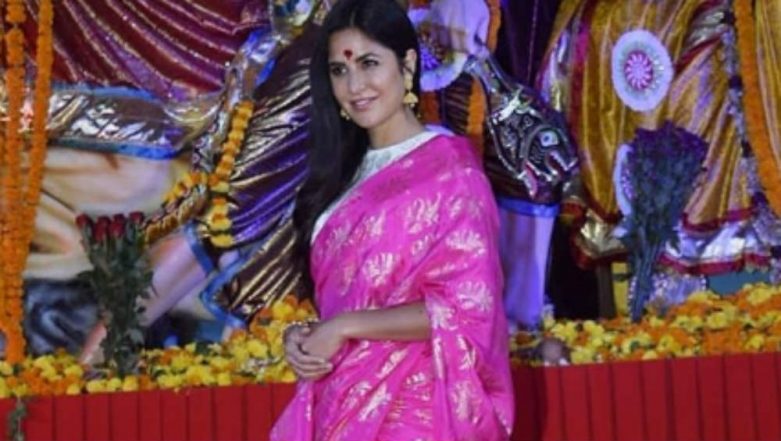 Festivals indeed bring people closer no matter what their history might be. At least that's what it looks like. Take for instance Katrina Kaif's this video where she is seen bonding with Ranbir Kapoor's best friend, Ayaan Mukerji. We all know that Ranbir is Katrina's ex. And now that Ayaan has been bonding big time with RK's current girlfriend Alia Bhatt, most of us would've thought that this meet would turn out to be awkward. But looks like Katrina is unfazed by what has happened and continues to look forward. No wonder she was seen catching up with her ex's BFF. Katrina and Ayaan even posed for the paparazzi together. Security Beefed Up For Salman Khan and Katrina Kaif as They Shoot at Mezyad Border Post; UAE Army To Guard The Bharat Actors.

Check out their video below-

The actress looked gorgeous in a pink saree at Durga Puja celebrations last night while Ayaan, just like Ranbir Kapoor, chose to step out in casuals. He was seen wearing a checkered blue and black shirt as he smiled for the shutterbugs with Ms Kaif. See their pic below-

In other news, Katrina just returned from Abu Dhabi where she was shooting for Ali Abbas Zafar's Bharat along with Salman Khan. As for Ayaan, he has been constantly shooting with Ranbir Kapoor, Amitabh Bachchan and Alia Bhatt for his upcoming next, Brahmastra.