COVID-19: Ellie Goulding Provides 400 Phones to the Homeless Amid The Coronavirus Outbreak

Singer Ellie Goulding has helped source 400 mobile phones, which will be given to homeless people to help them through the lockdown amid the ongoing coronavirus crisis 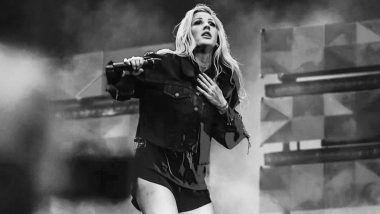 Singer Ellie Goulding has helped source 400 mobile phones, which will be given to homeless people to help them through the lockdown amid the ongoing coronavirus crisis. The singer, 33, along with her management company TaP Music helped charity Crisis to get the phones, reports dailymail.co.uk. Leonardo DiCaprio, Robert De Niro Offer Walk-On Roles in Their Martin Scorsese Film Killers Of the Flower Moon to Raise Funds for All In Challenge (Watch Video).

She admitted that she is "very worried" about how many people still need support. "We're all worried about coronavirus, but people who are homeless are particularly exposed to and threatened by the pandemic," Goulding said.

"Over the last few weeks we have seen an unprecedented and phenomenal effort to rehouse people sleeping rough by the government, local authorities and homelessness charities, but I have remained very worried about how many people will still need support. I've been determined to help keep them connected," she added.

The distribution of the phones began on April 15. The phones will go towards people Crisis supports as well as those who are currently staying in hotels across London.

Meanwhile, the "Love me like you do" hitmaker is currently in self-isolation with husband Caspar Jopling. She recently became the latest star to attempt the viral T-shirt handstand challenge on Instagram.

The singer wore a black crop top and matching leggings in the black and white clip as she made a successful attempt to put a T-shirt on while doing a handstand.