Depp's suit alleges that Heard's opinion piece, in which she described herself as "a public figure representing domestic abuse," cost him his role in the sixth installment of the 'Pirates of the Caribbean' franchise a" which would have netted him $22.5 million. 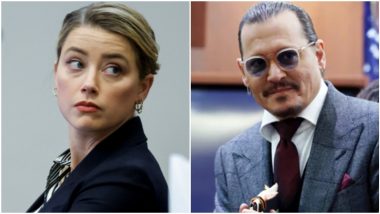 Actress Amber Heard told the jurors in often emotional terms about the times that Hollywood star Johnny Depp hit her, screamed at her, punched walls and shoved her to the ground. Heard was called to testify on the 14th day of the defamation trial underway, reports 'Variety'. Depp has sued her for $50 million, alleging that she destroyed his career by alluding to her domestic abuse allegations in a 2018 op-ed for the Washington Post. Amber Heard Testifies She Was Assaulted by Johnny Depp During Week Four Trial, Says ‘I Was Heartbroken’.

Heard spoke for about three hours, describing the early years of their relationship. Her testimony will continue on Thursday. She told the jury that Depp could be extremely loving, but also extremely jealous and abusive, especially when he was drinking or using drugs. "I thought he was the love of my life, and he was," she said. "He was also this other thing - and that other thing was awful."

Early in her testimony, Heard made it clear that she did not want to be there, saying that the trial has been among the worst experiences of her life. "This is horrible for me to sit here for weeks and relive everything," she said. "This is the most painful and difficult thing I have ever gone through." She cried on the stand as she tried to explain why she stayed with Depp despite escalating acts of violence. Depp did not make eye contact with her, and looked down or off to the side throughout her testimony.

On a May 2013 trip to Hicksville, an upscale trailer park near Joshua Tree in California, she said that Depp became paranoid when he saw a woman sitting too close to Heard. She said that Depp grabbed the woman's wrist, twisting it, and said, "Hey man, you think you're touching my f****** girl?" According to Heard, he then asked the woman, "Do you know how many pounds of pressure it takes to break a human wrist?"

Later, in their trailer, Heard said that Depp flew into a rage and started smashing things, and accused her of hiding his cocaine. "He's like grabbing my breasts, touching my thighs," she said, as she started to become emotional. Heard is expected to tell jurors about several other instances of sexual violence as her testimony continues, including one incident in which she alleges that Depp penetrated her with a bottle.

Heard also testified over the course of four days in the United Kingdom in 2020, after Depp sued the The Sun newspaper for calling him a "wife beater". The Sun prevailed in that trial, as the judge ruled that Heard's allegations were "substantially true." Depp is looking for a second chance to redeem his reputation. Johnny Depp vs Amber Heard Defamation Trial Day 14 - Watch Live Streaming & Coverage of Court Proceedings from Virginia.

In his own testimony two weeks ago, Depp maintained that Heard had repeatedly struck him, and that while he had yelled at her during their relationship, he never struck back. Depp's attorneys have also accused Heard of concocting an "elaborate hoax" in order to benefit her career at the expense of his.

Depp's suit alleges that Heard's opinion piece, in which she described herself as "a public figure representing domestic abuse," cost him his role in the sixth installment of the 'Pirates of the Caribbean' franchise a" which would have netted him $22.5 million.

Heard told the jury that she met Depp when she was cast in "The Rum Diary," and they began their relationship on the press tour for the film in late 2011. She said they bonded over obscure poetry and literature and that at first it was a "whirlwind romance." "When I was around Johnny I felt like the most beautiful person in the whole world," she said.

"He made me feel seen. He made me feel like a million dollars." But early in the relationship, she said that Depp became possessive and controlling. She said she would not tell him about auditions she was going on and that he made harsh comments when she wore a low-cut dress. She said that sometimes he would have a "blow-up" and would smash things, throw a glass, flip over a table or punch the wall.

"I knew it was wrong and I had to leave him," she said, becoming emotional on the stand. "That's what broke my heart. I didn't want to leave him." Heard testified that Depp would often make unfounded accusations of infidelity, and she would defend herself, saying they were untrue. That would escalate to violence, she said.

"He would push me, shove me down. I'd get back up," she said. "He'd shove me back down. Eventually he would just hit me." Sometimes, she said, he would hold her in place and slap her repeatedly. Heard also spoke about Depp's drug use, saying she got to know how his personality would differ depending on whether he was taking speed, opiates, Adderall, cocaine, or Quaaludes.

She said she was particularly disapproving of his alcohol and cocaine use, saying he would become violent when drunk or high. She said she was disturbed to realise that no one around Depp seemed to be able to rein in behaviour. She described one incident where he was holding a small dog out of a car window and "howling like an animal," reports 'Variety'. "Everyone froze," she said. "Nobody did anything. I, too, was torn about what I should do."

She said that Depp would sometimes pass out, and that the people around him would clean up after him. She said she cleaned up after him once when he lost control of his bowels. "No one told him," she said. "No one was honest with him."

(The above story first appeared on LatestLY on May 05, 2022 12:23 PM IST. For more news and updates on politics, world, sports, entertainment and lifestyle, log on to our website latestly.com).