The Hollywood awards season has officially begun with Golden Globes this week. Next up is the BAFTAs. While there's one more week's worth of wait for the final list of nominees, the British Academy has unveiled the nominees of the Rising Star Award which is decided through public voting. 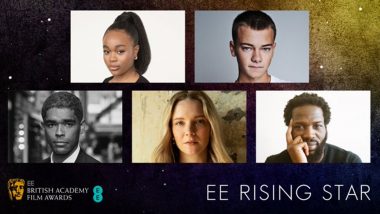 The British Academy, which hosts BAFTA, has decided to do something unusual this year. It released the nominees for the Rising Star Award a week before the final list of nominees is unveiled. It is the only category at the BAFTAs that gets its winner through public voting. The nominees include Kingsley Ben-Adir (One Night in Miami, Love Life), Bukky Bakray (Rocks), Morfydd Clark (Saint Maud, The Personal History of David Copperfield), Sope Dirisu (His House, Gangs of London) and Conrad Khan (County Lines). BAFTA 2021: Priyanka Chopra, Adarsh Gourav Feature on Longlists for ‘The White Tiger’

According to Hollywood Reporter, this is also the first time in 16 years that BAFTA's this category has only British actors. Check out the list of nominees in the Rising Star Awards category here...

In a blog shared on BAFTA's website, it says, "The EE Rising Star Award honours a performer who has shown truly outstanding talent on the big screen in the past year and captured the attention of both the public and film industry." The full BAFTA nominations list will be announced on March 9 while the event is expected to be held on April 11.

(The above story first appeared on LatestLY on Mar 03, 2021 05:15 PM IST. For more news and updates on politics, world, sports, entertainment and lifestyle, log on to our website latestly.com).