Beyonce's magazine cover of Vogue for the September 2018 issue has come out which shares an uncanny resemblance with that of Rihanna's. 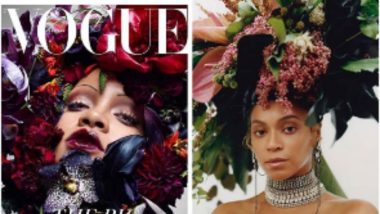 It was only a couple of days back when Rihanna's Vogue magazine cover for August 2018 came out and it created quite a buzz on social media. That was because the American sensation shaved off her eyebrows for the cover. Leaving that aside, the concept was all about flower power. And now, Beyonce's magazine cover of Vogue for the September 2018 issue has come out which shares an uncanny resemblance with that of Rihanna's.

In fact, it's not just us but Diet Sabya, who is quite popular for calling out cheap/ fake copies, took to Instagram to share similar thoughts on the similar covers of Vogue. Talking about Riri, she got severely trolled for taking such a drastic step and shaving off her eyebrows, or maybe she was hiding it with makeup but Twitter definitely didn't approve of it.

It’s here! @Beyonce stars on the cover of our September issue. Read the full story, in her own words: https://t.co/T7E2FbGDPn pic.twitter.com/GcX0ziiJD7

And This Is What Rihanna’s Vogue Cover Looks Like- 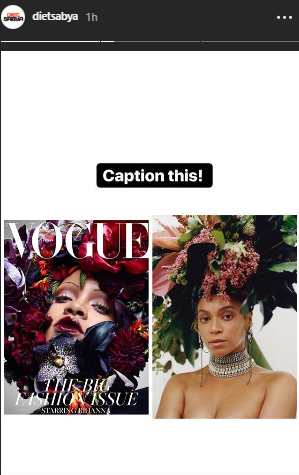 While she opted for a loud and bold makeup for the August cover, Beyonce, on the other hand, decided to keep it simple on the September issue of Vogue. Throwing more light upon that, she said, "I think it’s important for women and men to see and appreciate the beauty in their natural bodies. That’s why I stripped away the wigs and hair extensions and used little makeup for this shoot. To this day my arms, shoulders, breasts, and thighs are fuller. I have a little mommy pouch, and I’m in no rush to get rid of it. I think it’s real. Whenever I’m ready to get a six-pack, I will go into beast zone and work my ass off until I have it. But right now, my little FUPA and I feel like we are meant to be."

Anyway, who do you did a better job at being the cover girl for the glossy? Tell us in the comments below.

(The above story first appeared on LatestLY on Aug 06, 2018 08:31 PM IST. For more news and updates on politics, world, sports, entertainment and lifestyle, log on to our website latestly.com).