Doctor Strange in the Multiverse of Madness Plot Leaked on Reddit? Rumoured Plotline Reveals How It Connects to WandaVision!

Doctor Strange in the Multiverse of Madness stars Benedict Cumberbatch, Elizabeth Olsen and Benedict Wong, and is directed by Sam Raimi, with the film scheduled to release on March 25, 2022. 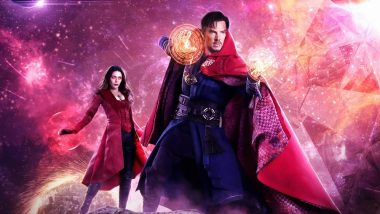 Fan Art for Doctor Strange in the Multiverse of Madness (Photo Credit: Twitter)

Now of course we will have to take this info with a grain of salt, but we can’t deny that he has had an amazing track record with MCU leaks. You can check out what he said in the link down here.

For those who don’t want to click the link, can read the info here too.

My time to shine again HELLLLOOOOO

So for Doctor Weird 2:

Wanda is the main villain, Shuma only has a small role as a demon Wanda summon to bring Chavez to her.

The Darkhold is the reason it's corrupting Wanda's mind with the idea of doing whatever it takes to get her kids back it makes her think they need help and are in danger somewhere in the Multiverse.

Wanda is trying to reach them but can only use astral projection to travel the multiverse and she needs to make it so her whole body could go through to get to her kids. The solution is Chavez who can create portals. Wands use the Darkhold to summon demons to bring Chavez to her but the demons destroy everything in their way including Chavez's reality. Chavez get to MCU and seek help and get to Strange who's attending Palmer's wedding at the time and then Shuma gets there and is attacking New York.

Strange beat Shuma and talk to Chavez. After that Strange goes to Wanda and they have a fight. Strange trying to bring her back to her senses but there's no use.

Wanda get to Kamar Taj and blow the place up looking for Chavez. Strange and Chavez run into other realities escaping Wanda. They go through a lot of crazy places till they get to a Mordo variant who's the master of the mystic arts in his universe. He trickes them and bring them to the Illuninati a police keeping force of the multiverse led by Charles Xavier. They put Strange and Chavez in prison. To get to them Wanda takes over the body of this universe's Wanda who's just a normal housewife with her kids. She uses her body to kill some of the Illuminati and get Chavez out. But before she can do that Xavier enter her mind and tries to free her mind from MCU Wanda. He's also trying to reach MCU Wanda and help her come to to her senses. When Wanda finally get to her kids she realize they were never in any danger and were living happily with the other Wanda in that universe on a farm. The kids want their "real" mother back and fear this Wanda. This breaks Wanda and she disappear. But not before she does the same thing she did in WandaVision but this time to the whole multiverse. Strange and Chavez get back to the MCU but the Multiverse is more broken than ever. I'm guessing what Wanda did will get her kids to the MCU and they'll be older.

What leads me to believe this plot leak as credible is that recently we have gotten previs leaks about Wanda Maximoff fighting Professor X in casual clothes. If true, it looks like the movie is going to be one of the darkest MCU films ever. Doctor Strange 2: Is Scarlet Witch Fighting Professor X in the Upcoming Marvel Film? This Shocking New ‘Leak’ Claims an Epic Multi-Versal Face-Off!

Doctor Strange in the Multiverse of Madness stars Benedict Cumberbatch, Elizabeth Olsen and Benedict Wong, and is directed by Sam Raimi, with the film scheduled to release on March 25, 2022.

(The above story first appeared on LatestLY on Oct 06, 2021 05:02 PM IST. For more news and updates on politics, world, sports, entertainment and lifestyle, log on to our website latestly.com).