Drake and Ye’s Feud Is Over, the Rappers Party Together in Toronto (View Pic)

Although West and Drake started off as friends and collaborators -- West directed the 2009 video for Drake's breakout single 'Best I Ever Had' -- their relationship has gone south over the years. 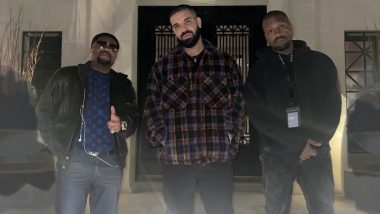 Washington [US], November 17: Grammy-winning artists Kanye West and Drake appear to have made amends. The rappers were recently seen partying together at Drake's Toronto mansion. Kanye West Wants an End to His 12-Year-Old Feud with Drake as He Invites Him to Join the Show to Free Larry Hoover.

The 'Donda' rapper shared a photo of himself alongside Drake and J Prince on Instagram on Tuesday, captioning the post with a single dove emoji.

J Prince also shared the image, writing that the group had a "beautiful night" in Canada on Monday.

In his caption, J Prince also alluded that Drake agreed to perform with West on stage next month. In a video last week, West proposed the idea as a concert to benefit Larry Hoover, the co-founder of the Gangster Disciples gang, who is currently in prison in Colorado.

In a post of his own, Drake shared two videos from the occasion. The first video features comedian Dave Chappelle addressing a crowd in what seems to be Drake's Toronto home.

The second video shows the 'Certified Lover Boy' rapper with his arm around West as they look down at the camera and dance to music playing in the background. "You have reached your destination," Drake captioned the post.

The meetup comes about a week after West addressed his years-long feud with Drake in a video shared by J Prince on Twitter, saying that he was ready to put it "to rest." "I'm making this video to address the ongoing back-and-forth between myself and Drake," West said in the video. "Both me and Drake have taken shots at each other and it's time to put it to rest."

Inviting Drake to perform with him, West concluded, "I believe this even will not only bring awareness to our cause but prove to people everywhere how much more we can accomplish when we lay our pride to the side and come together."

The feud between the two rappers has spanned years. West just recently mentioned his back-and-forth with Drake when he appeared on the Drink Champs podcast on November 4, reported People magazine.

Though the Canadian rapper never calls out West by name, fans were quick to dissect several lines on multiple songs from 'Certified Lover Boy' that appear to take digs at him, most notably on '7AM on Bridle Path'. Kanye West to Drake On Twitter: Don't Follow My F*&%@ng Wife On Instagram!

Although West and Drake started off as friends and collaborators -- West directed the 2009 video for Drake's breakout single 'Best I Ever Had' -- their relationship has gone south over the years.

They've argued about West's alleged involvement in the 2018 leak that Drake has a son -- Adonis, now 4 -- and rumours that he had hooked up with West's now-estranged wife Kim Kardashian West, who has denied any romance with Drake.