Marvel is considering replacing Jeremy Renner as Hawkeye after the recent allegations hurled against him by his ex-wife, Sonni Pacheco. Though nothing is confirmed around the same, insiders suggest the talks for the same are currently going on. 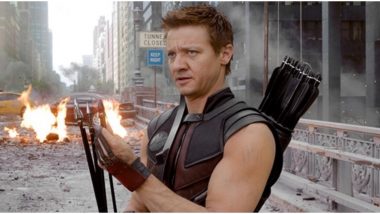 Jeremy Renner's personal differences may start affecting his professional equations, starting with his collaboration with Marvel. As per a recent report in We Got This Covered, Marvel is considering replacing the actor after a string of his recent allegations. While his equation with ex-wife Sonni Pacheco was strained for the longest time, it went for worse after she filed a motion for sole custody of their daughter. Reason? His cocaine and alcohol addictions. Jeremy Renner Once Did Cocaine with Underaged Girls, Reveals a Friend.

Though the Avengers: Endgame actor has issued a clarification on his part but industry insiders are already turning their back on him. Disney, in particular, has started thinking about his replacement as they don't want their family-friendly image tainted with this troubling news. The internal team at Marvel/Disney is still considering taking this step and no official confirmation around the same will be made anytime soon. Even a few of his fans on Twitter have asked him to leave MCU as they were disheartened to hear all the accusations which included him threatening his kill ex-wife Pacheco. Avengers EndGame Star Jeremy Renner Accused of Threatening to Kill Ex-Wife Sonni Pacheco.

Just heard something. Heard Marvel are considering some options just in case they'll decide not to use Renner for the Hawkeye show. pic.twitter.com/X8Ztrf97Sp

However, there's a dignified way for him to quit Marvel's universe and it doesn't involve his replacement. There are chances that Marvel may ask him to give his mantle to Kate Bishop in the upcoming Hawkeye series on Disney +. This will benefit both the parties and won't affect his star image. But will Studio consider this step or simply ask him to move on? This is something that time will have to answer for.

(The above story first appeared on LatestLY on Oct 21, 2019 08:38 AM IST. For more news and updates on politics, world, sports, entertainment and lifestyle, log on to our website latestly.com).