Washington D.C. While fans leave no stone unturned to shower their favourite celebrities with love, some fans request stars to perform bizarre things at a show. Something similar happened to singer-songwriter Kacey Musgraves at a recent concert. 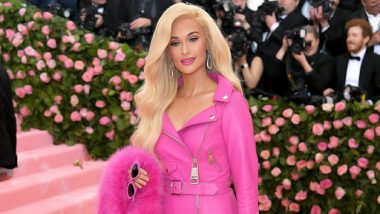 Washington D.C : While most fans leave no stone unturned to shower their favourite celebrities with love, some fans request stars to perform bizarre things at a show. Something similar happened to singer-songwriter Kacey Musgraves at a recent concert. The singer put her foot down when the crowd tried to make her do a shot out of a fan's shoe, reported Fox News. The Golden Hour singer was performing a concert at the Enmore Theater in Sydney, Australia when someone in the audience suggested the star to do a "shoey", a local Australian tradition where the participant drinks down a beer from someone else's shoe. Reportedly, the crowd started chanting urging the singer to do a "shoey" and one fan from the audience even presented their own cowboy boot for the bizarre deed. Lionsgate to Launch ‘Twilight in Concert’ World Tour in August

Musgraves initially tried to laugh off the request and said "No way," calling it "disgusting." The crowd then suggested her using a shoe from a band member of her choice. The 30-year-old singer showed off her heels and responded, "Well, newsflash, that wouldn't work for me."The crowd continued to shout at her and she asked, "Do you think I'm going to do that out of your shoe?"Even as the fans cheered 'yes,' the Grammy award winner shut them down by saying, "I'm not f---ing drinking out of your shoe."Musgraves responded to the audience members, saying "You could have athlete's foot or something. I don't need that right now."

The singer was correct to be concerned. A study conducted by Western Sydney University's (WSU) School of Medicine Gastroenterology Laboratory revealed that doing a "shoey" can result in a staph infection, reported People.Some fans were embarrassed that the crowd tried to pressure Musgraves into the tradition. Many people vented their displeasure on Twitter.

A Twitter user wrote, "I can't believe we, as an audience, almost bullied Kacey Musgraves into doing a shoey on stage tonight. Oh what a world, indeed."Another fan disappointed by the request, wrote, "don't you dare think you can demand Kacey Musgraves to do a shoey!!! that behavior is tacky and not cute at the same time.""im so proud of Kacey for not doing the shoey," another fan tweeted. Expressing her disappointment, a user tweeted, "I thought Kacey Musgraves was a shoey free safe space... I was wrong."However, one fellow superstar Post Malone was happy to take a swig out of a shoe. Malone did a "shoey" during his Brisbane concert in January 2018.