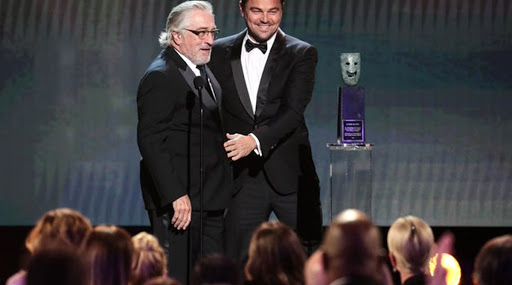 Martin Scorcese's next film Killers Of The Flower Moon was creating a lot of buzz about its casting and then suddenly Leonardo Di Caprio confirmed it. At the SAG Awards Ceremony last night, the Once Upon Time In Hollywood actor presented the Lifetime Achievement Award to Robert Di Nero. But before that, he revealed that he will be working with the legend in Scorcese's next film. Brad Pitt, Leonardo Di Caprio Denied Roles in ‘Brokeback Mountain’

Leonardo said, "And after 30 years, to work alongside Bob again in Martin Scorsese's upcoming drama Killers Of The Flower Moon, is a true honor." The actor had worked with Nero in This Boy's Life earlier and feels really honoured to work with him again. This will be the sixth film of Leonardo with Scorcese. Killers Of Flower Moon was first talked about when Variety reported about it in 2018. Guess finally the film will take shape.

Killers Of Flower Moon is based on a book by the same name by David Grann. Set in 1920, the book is on a Native American tribe called Osage Nation, who were one of the richest tribes due to the discovery of oil on their land. When the members of this tribe start getting killed, FBI launchea an investigation and unearthes something really sinister.