Star Trek: Discovery 3 makers CBS: All Access has released the show's season 3's new promo. The much-awaited instalment will drop in the U.S. on October 15, 2020 with a total of 13 episodes airing every Thursday on CBS: All Access. 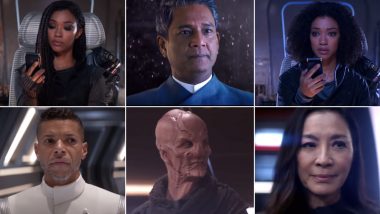 As per digitalspy.com, the third season "picks up in the aftermath of the Control encroachment, with Michael Burnham having now travelled more than 900 years to leave more signals for her predecessors. Though Spock has encouraged the Enterprise crew to erase the Discovery from Federation history for safety purposes, Burnham is very much still alive and exploring new frontiers." JJ Abrams Birthday: From 10 Cloverfield Lane to Star Trek Beyond, 5 Awesome Films That the Director-Producer Has Given Us.

Proud to be a part of @StarTrek Discovery Season 3 releases on 15th October on @CBSAllAccess here is the Trailer. https://t.co/rp11DKohoW

For us, the highlight of Star Trek: Discovery 3 will be Indian actor Adil Hussain who is front and centre in the series. In fact, the actor not only shared the good news with his fans, but also thanked his co-star Sonequa Martin-Green 'for being so generous and kind.'

Absolutely thrilled to announce that #StarTrek@StarTrek Discovery Season 3 will premiere on 15th Of October 2020 on @CBSAllAccess. Proud to be a part of this ONE. ❤️💥 Special Thanks to dear @SonequaMG for being so Generous and Kind 🤗 Trailer Details 👇https://t.co/X8KPgzT6bB

The official synopsis for the third season reads, "After following Commander Burnham into the wormhole in the second season finale, season three of Star Trek: Discovery finds the U.S.S. Discovery crew landing into an unknown future far from the home they once knew. Now living in a time filled with uncertainty, the U.S.S. Discovery crew, along with the help of some new friends, must work together to restore hope to the Federation.”

(The above story first appeared on LatestLY on Jul 28, 2020 07:50 PM IST. For more news and updates on politics, world, sports, entertainment and lifestyle, log on to our website latestly.com).