Get set for an extravaganza as this piece of news is for all Joe & Anthony Russo fans. As we all know how due to the pandemic, OTT is the future, and so cashing on the same the Russo Bros are reportedly set to bring a new film on Netflix starring Ryan Gosling and Chris Evans. Read on. 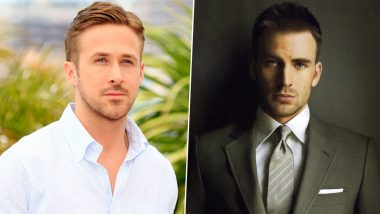 Get set for an extravaganza as this piece of news is for all Joe & Anthony Russo fans. Well, as we all know-how due to the pandemic, OTT is the future, and so cashing on the same the Russo Bros are reportedly set to bring a new spy film on Netflix starring Ryan Gosling and Chris Evans. Nope, you ain't daydreaming as this is the truth. As per a report in the Deadline, the streaming giant has 'set its most financially ambitious feature film' titled as The Gray Man. 'The intention here is to create a new franchise with a James Bond-level of scale and a budget upwards of $200 million,' the report further mentions. Russo Brothers Invite Nigerian Kids to Extraction 2 Premiere After Their Low-Budget Remake of Extraction Trailer Goes Viral.

The most interesting part of the project as the leads - Evans and Gosling. On one side, it's Chris who has a working history with Russo Bros, on the other hand, for Ryan it will be a first-timer. The Russo AGBO is said to produce this one which was penned by Joe Russo. However, the writing has been given a polish by his Avengers screenwriters, Christopher Markus and Stephen McFeely.

"The action thriller is a deadly duel between killers as Gentry (Gosling) is hunted across the globe by Lloyd Hansen (Evans), a former cohort of Gentry’s at the CIA," the report states further on the storyline. Joe Russo Confirms Extraction 2 with Netflix, Chris Hemsworth Likely to Return.

“The movie is a real mano a mano between those two great actors, who represent two different versions of the CIA, in what it can be, and what it can do,” Anthony Russo told Deadline. “For those who were fans of Captain America: Winter Soldier, this is us moving into that territory in more of a real-world setting. That’s what this movie really means for us," he added.

Russo Bros Extraction starring Chri Hemsworth was a super-duper blockbuster and so we bet fans would surely be excited after this announcement. Stay tuned!

(The above story first appeared on LatestLY on Jul 17, 2020 10:25 PM IST. For more news and updates on politics, world, sports, entertainment and lifestyle, log on to our website latestly.com).