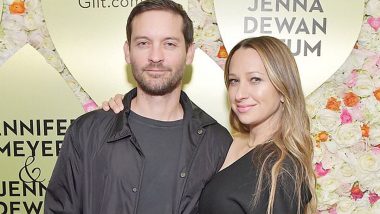 Hollywood star Tobey Maguire and Jennifer Meyer had first separated in 2016, and now the jewellery designer has filed for divorce from the actor. Meyer filed for divorce from the "Spider-Man" star on Wednesday, reports people.com. In October 2016, a source had said that the couple had "been living separate lives for a while". Drew Barrymore Opens Up on Divorce from Will Kopelman, Says ‘It Felt like Everything Was Just Wrong’

"They have completely different interests and haven't seemed to be connecting," the source had said at the time. He's extremely private and prefers to stay home, and she's very social and has tons of girlfriends. They haven't been happy together for a long time, but they are great parents and they love their children," the source said. Kelly Clarkson Addresses Divorce From Husband Brandon Blackstock, Says She ‘didn’t See’ It Coming

Meyer and Maguire have 11-year-old son Otis and 13-year-old daughter Ruby. The couple seemed to have remained friends. A source had said in December 2017 that their relationship was doing "much better", but that they still were "definitely not reconciling". In 2018, Maguire attended the opening of Meyer's jewellery store in Los Angeles and posed for photos with her. In June, Meyer wished Maguire a happy Father's Day on Instagram, calling the actor her "best friend". The two got married in 2007.

(The above story first appeared on LatestLY on Oct 31, 2020 05:29 PM IST. For more news and updates on politics, world, sports, entertainment and lifestyle, log on to our website latestly.com).