Top Gun: Maverick was everything that I wanted a sequel to the original to be. It was fun, exhilarating and surprisingly very emotional. The film was filled with heart and ends on a note that will make you genuinely happy with where these characters end up. 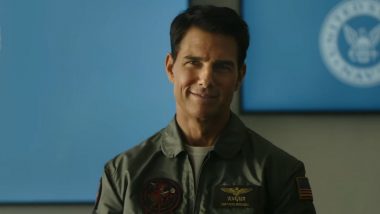 Top Gun: Maverick has hit theatres and Captain Pete “Maverick” Mitchell (Tom Cruise) is back into our lives with a thunderous outing. The sequel set 30 years after the original sees Maverick trying his best not to get promoted as he doesn’t want to be grounded. He is sent back to Top Gun to train a new bunch of pilots for a mission that calls for a very heavy sacrifice. Training the pilots, will make him meet the ghosts of his past as well which would in turn create for some complication. Top Gun Maverick Movie Review: Tom Cruise's Legacy Sequel is a Gripping, Emotional Spectacle That Honours the Original! (LatestLY Exclusive).

Top Gun: Maverick was everything that I wanted a sequel to the original to be. It was fun, exhilarating and surprisingly very emotional. The film was filled with heart and ends on a note that will make you genuinely happy with where these characters end up. So, with that being said, here is the ending of Top Gun: Maverick explained. Top Gun Maverick Movie: Review, Cast, Plot, Trailer, Release Date – All You Need to Know About Tom Cruise's and Jennifer Connelly's Action Drama Film!

After Maverick’s plane gets shot down, he is grounded and wakes up in a field with an enemy Apache helicopter shooting at him. Just as he is about to be taken out, Lieutenant Bradley “Rooster” Bradshaw (Miles Teller) saves him in the final moment, unfortunately his jet is shot down as well. Maverick runs to him to make sure he is okay. After reaching there, they both reunite and try coming up with a plan to escape.

On the enemy base, Maverick spots a F-14A and decides to steal it. Being successful in doing so, both of them finally learn to work together and escape from the base. Unfortunately, they are intercepted by enemy planes and a dog-fight begins. The base get’s Rooster’s message that they are on the way as his radio switches on as well.

After taking down both the planes and being out of ammo, they are suddenly intercepted by a third plane while trying to make it to base. After an intense chase, they are saved by Hangman (Glen Powell) who flies off from the base after learning that Maverick and Rooster are alive. After landing on the ship, both Maverick and Rooster embrace each other and set aside their differences and celebrate.

Maverick makes one last stop to Penny’s (Jennifer Connelly) bar, but learns that she has gone on a sailing trip and doesn’t know when she will return. Maverick and Rooster then go back to Mitchell’s hangar where they work on his P-51 Mustang. Over there, Maverick is surprise by Penny and the film ends with both of them flying away in the Mustang.

What Does This Mean for Pete Mitchell?

He has reconciled with Rooster after pulling his papers and setting him back. He has made peace with Goose’s death here as well, he fulfilled Iceman Kazansky’s (Val Kilmer) final wish too and he has Penny by his side now. Flying away with Penny, Maverick is exactly where he needs to be, however, we have a new young set of characters too.

With Goose’s son Bradley still out there, maybe we can learn more about him and how he comes into his own. He finally has a father figure in Maverick, and it looks like he is content finally. We even have Glen Powell’s Hangman, and maybe if there is a next film, we can see him and Rooster lead the squad together.

Currently there are not sequel plans for a Top Gun 3, although if they do decide to make another, it would be quite fun to see that dynamic. There is an entire new crew out there right now, and it would be fun to see a Top Gun crew for a new generation.

Anyways, until then, watch Top Gun: Maverick as it’s playing in theatres near you.

(The above story first appeared on LatestLY on May 26, 2022 07:41 PM IST. For more news and updates on politics, world, sports, entertainment and lifestyle, log on to our website latestly.com).