Transformers - Rise of The Beasts: Plot, Cast, Release Date - All You Need to Know About the Upcoming Transformers Movie

Transformers: The Rise of Beasts will release on June 24, 2022. Paramount Pictures will be distributing the movie worldwide. Steven Caple Jr will be taking over the directorial duties this time around. 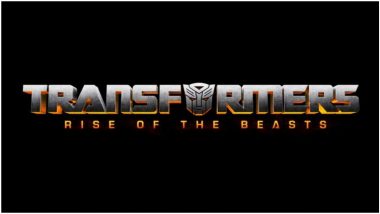 It will be the seventh entry in the Transformers franchise, and the first team-led film since the spinoff, Travis Knight-directed Bumblebee. Here’s all you need to know about Transformers: Rise of The Beasts.

While the plot details are still kept under wraps, the title hints towards the fact that Autobots will be meeting up with the characters and creatures from the spin-off series Beast Wars. As per Deadline, Transformers: Rise of The Beasts is going to take place in 1994, hinting at the fact that it might be a continuation of Bumblebee, although that’s just speculation at this point. Bumblebee Movie Review: Hailee Steinfeld and John Cena's 'Transformers' Film Brings Cheers Back Into The Franchise!

With a new movie and setting, we will be seeing some new characters along with returning ones like Optimus Prime, who will be voiced by Peter Cullen once again, and Bumblebee. Arcee and Mirage will also be joining them, as Arcee will be reportedly be transforming into a Ducati 916 and the latter into a Porsche. On the villains side we have Scourge, the leader of Terrorcons and will be joined by Nightbird. On the Maximals side we have the confirmation of Optimus Primal being in the film, who can transform into a Gorilla and is the leader of the group. Optimus Primal will be joined by Rhinox, who can turn into a rhino, and Air-Razor who can transform into a bird.

The new addition to human casts includes Anthony Ramos of In the Heights fame, who will play the character of Noah, an ex-military expert who lives with his family, and Dominique Fishback of Judas and The Black Messiah fame, who will play the character of Elena, an artifacts researcher. Lauren Vélez will play Noah's mother. Transformers Movie at Paramount Planning to Get Anthony Ramos on Board to Play the Lead Role.

Steven Caple Jr will be taking over the directorial duties this time around. He is known for direction the Michael B Jordan-Sylvester Stallone-starrer Creed II. Darnell Metayer and Josh Peters will be scripting the movie.

Transformers: The Rise of Beasts will release on June 24, 2022. Paramount Pictures will be distributing the movie worldwide. The article will be updated as more information on the film comes out in the future.

(The above story first appeared on LatestLY on Jun 23, 2021 10:21 PM IST. For more news and updates on politics, world, sports, entertainment and lifestyle, log on to our website latestly.com).