Venom Let There Be Carnage: Does This Concept Art Confirm Spider-Man Will Appear in the Film?

Recently, Apple TV had an exclusive showcase for behind scenes for Venom: Let There Be Carnage. It featured interviews with director Andy Serkis and the cast while showcasing some concept art for the film. An Eagle-eyed fan caught SpiderMan battling Venom! 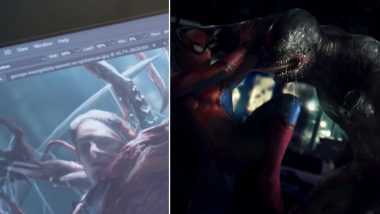 With how Sony has handled their Marvel universe, many have wondered whether Spider-Man will ever show up in these films. Recently, Apple TV had an exclusive showcase for behind scenes for Venom: Let There Be Carnage. It featured interviews with director Andy Serkis and the cast while showcasing some concept art for the film.

An Eagle-eyed fan was able to catch a peculiar concept art which was indeed very interesting. It featured Spider-Man battling with Venom which was done by the artist George Evangelista. You can check out the concept art down here below.

In the AppleTV Exclusive BTS of the new trailer, they showed concept art and if you zoom in on the tabs, you see the artist George Evangelista’s (@artofgeorge) ‘Venom vs SpiderMan’. Here is his art for it. Interesting. #VenomLetThereBeCarnage pic.twitter.com/CdnxN6ftfO

What’s interesting here is that it seems to be Tom Holland’s Spider-Man who is sporting his original red and blue costume. If this indeed has any weight, then we can surely expect Spider-Man to battle Venom at some point in this franchise. Venom 2 – Let There Be Carnage Trailer: Tom Hardy’s Anti-Hero Meets His Biggest Rival in Carnage And It’s Mayhem Thereon (Watch Video).

This isn’t the only first MCU connection that we have had in this cinematic universe though. Fans were taken by surprise when Michael Keaton’s Vulture showed up at the end of Morbius’ trailer. At this point what the plan seems to be is a bit hazy, but it looks like Sony might be merging its universe with the MCU.

Seeing as to how Spider-Man: No Way Home is rumoured to be a multiverse film, we can expect a possible connection with the Sony universe. Whatever it may be, we hope that Spider-Man does indeed interact with Venom at some point because it will be a real missed opportunity if they don’t.

Venom: Let There Be Carnage is directed by Andy Serkis and stars Tom Hardy, Woody Harrelson, Naomie Harris and Michelle Williams and is slated to release this fall.

(The above story first appeared on LatestLY on Aug 05, 2021 10:13 AM IST. For more news and updates on politics, world, sports, entertainment and lifestyle, log on to our website latestly.com).