Whoopi Goldberg may have played a Catholic nun, but she is apparently not familiar with the church's teachings. 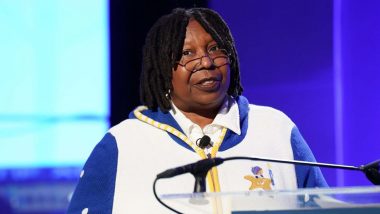 Hollywood star Whoopi Goldberg may have played a Catholic nun, but she is apparently not familiar with the church's teachings. The Sister Act star has been ripped after she blasted an archbishop for denying Nancy Pelosi communion, reports aceshowbiz.com. The actress defended Pelosi after the Catholic archbishop of San Francisco, Salvatore Cordileone, announced that the House Speaker is to be denied Holy Communion in his archdiocese because of her support for abortion rights. Whoopi Goldberg Returns to Host ‘The View’ Following Two-Week Suspension for Holocaust Remarks.

The archbishop said Pelosi should "refrain from referring to your Catholic faith in public and receiving Holy Communion" unless she repudiates her longtime advocacy of abortion rights. Taking to 'The View' to weigh in on the communion ban, Goldberg began in the segment: "The abortion rights battle is starting to blur the lines between church and state. The archbishop of San Francisco is calling for Speaker Nancy Pelosi to be denied receiving communion because of her pro-choice stance. He's one of the priests who also called president Biden to be denied sacrament." Whoopi Goldberg Suspended From Hosting ‘The View’ for Two Weeks Over Her ‘Holocaust Not About Race’ Remark.

"This is not your job, dude!" the award-winning entertainer furiously exclaimed. "That is not, you can't, that is not up to you to make that decision." She added, "How dare you." But many Catholics disagreed with Goldberg, reminding her that it's actually the archbishop's job and she's not qualified to lecture the archbishop about what is and is not his job. "Canon law is indeed the Bishop's responsibility, not yours, Whoop. You played a nun; you weren't one," one pointed out.

Another said: "It is his job to make sure the church and congregation are in one accord! People like Whoopi can't make it anymore so they have to get noticed somehow! How about cancelling the view!!" A third remarked, "uhhh no whoopi that is his job." In announcing the ban on Friday, Cordileone explained that he had attempted to meet and speak with Pelosi several times in the months leading up to his decision. He wrote that according to canon law, Pelosi is "obstinately persevering in manifest grave sin" and that it is his responsibility as archbishop to enforce church discipline against her.

(The above story first appeared on LatestLY on May 24, 2022 05:12 PM IST. For more news and updates on politics, world, sports, entertainment and lifestyle, log on to our website latestly.com).