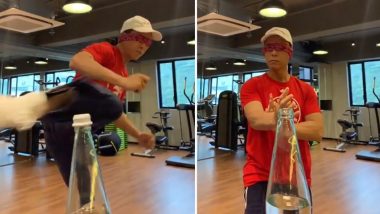 Check out the video here:

Sharing the video, the Return of Xander Cage actor wrote, "Chirrut feeling the force + Ip man’s steady aim + no plastic bottle = the universe strongest." Yen played Chirrut Imwe in Rogue One and has also been the lead of Ip Man series and hence mentioned the two in his caption. After Jason Statham, Akshay Kumar Aces the Bottle Cap Challenge – Watch Video.

Donnie Yen is all set to be seen in Ip Man 4 next. The film is up for release this month. The fourth instalment brings Ip Man to America and the film also stars American martial artist Scott Adkins.

(The above story first appeared on LatestLY on Jul 03, 2019 11:25 PM IST. For more news and updates on politics, world, sports, entertainment and lifestyle, log on to our website latestly.com).