Khiladi: Makers Release First Glimpse Of Ravi Teja Starrer On His Birthday And It Looks Like A Mass Entertainer! (Watch Video)

It is Tollywood star Ravi Teja’s birthday and the makers of his upcoming film titled Khiladi have shared the first glimpse of it and it looks like a mass entertainer. 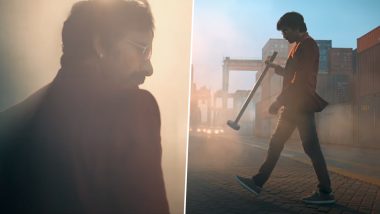 It is Tollywood star Ravi Teja’s birthday and the makers of his upcoming film titled Khiladi have shared the first glimpse of it and it looks like a mass entertainer. The video gives a glimpse of Ravi’s character, who looks stylish in a semi-formal avatar. He is seen walking around a container port , surrounded by cargo containers, with a sledgehammer in his hand. There are three vehicles seen approaching him, but he looks fearless and set to face it all. Ravi Teja Birthday: I Dont Want Luv, Just Do It, Mass Biriyani – 5 Peppy Tracks Featuring the Krack Actor That Will Make You Groove Instantly.

It is Ravi Teja’s swag that has grabbed netizens’ eyeballs and one just cannot stop praising his avatar. The video does not drop any hint about the film’s plot, but it comes with the tagline that says, ‘Play Smart’. The film’s music has been composed by the ace composer Devi Sri Prasad and he has given the promo a kickass background score. Ravi Teja Birthday: 5 Blockbusters For Which The Telugu Actor Had Collaborated With Puri Jagannadh!

Watch The First Glimpse Of Khiladi Below:

Directed by Ramesh Varma, the film will feature Dimple Hayathi, Meenakshi Chaudhary and Keshav Deepak in key roles. Bankrolled by Satyanarayana Koneru, the makers are eyeing to release Khiladi during summer this year.

(The above story first appeared on LatestLY on Jan 26, 2021 12:11 PM IST. For more news and updates on politics, world, sports, entertainment and lifestyle, log on to our website latestly.com).