Salaar: Prabhas Completes The First Schedule! Cinematographer Bhuvan Gowda Shares An Intriguing Pic From The Sets Of The Film

Salaar, directed by Prashanth Neel, had gone on floors in January in Hyderabad. Touted to be an action thriller, the flick will feature Prabhas and Shruti Haasan in the lead. 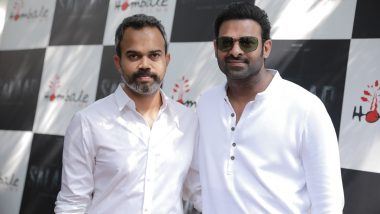 Salaar, directed by Prashanth Neel, had gone on floors in January in Hyderabad. The shooting had reportedly commenced in the coal mines near the city of Godavarikhani, Telangana. Touted to be an action thriller, the upcoming flick will feature Prabhas and Shruti Haasan in the lead. The team has wrapped the first schedule of this Prabhas starrer and cinematographer Bhuvan Gowda has shared a picture of the same from the sets of Salaar. In the picture, you’ll see the crew climbing up a ladder to set up a shot. It is indeed an intriguing black and white photograph! Salaar: Prabhas’ Actioner Launched; KGF Star Yash Makes His Presence Felt at the Puja Ceremony.

In an interview with Bangalore Times, director Prashanth Neel had explained the meaning of the film’s title. He was quoted as saying, “There are many interpretations of the term Salaar. It is a more colloquial word, so the meaning I will derive from it is commander-in-chief. The right hand man to a king, the general, is what I would say.” Talking about Prabhas’ look and character in the film, he had mentioned, “The character that I am trying to portray is dark and I wanted to make that clear from the outset. The first look had to explain the nature of the movie, without giving out too much detail. An image like this could also suggest that he is in the army, which is why I added the caption to avoid any such confusion.” After Master’s Success, Vijay Sethupathi To Once Again Turn Baddie for Prabhas’ Salaar?

Salaar is simultaneously shot in Kannada and Telugu languages. The film produced under the banner of Hombale Films will also be released in Hindi, Malayalam and Tamil languages. Stay tuned for further updates!

(The above story first appeared on LatestLY on Feb 09, 2021 09:16 AM IST. For more news and updates on politics, world, sports, entertainment and lifestyle, log on to our website latestly.com).