Samantha's Mahanati co-star Keerthy Suresh also wished the actress with a sweet post. She shared a poster that had the popular characters that Samantha played in her films including her roles in Jaanu, Seema Raja, Theri, Majili and Rangasthalam. 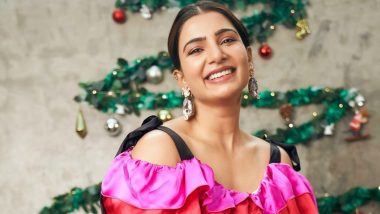 Samantha Akkineni is a force to reckon with and she has a fandom that knows no bound. Akkineni carved a successful career for herself and is now considered one of the biggest names in the industry. The actress has been working in movies for 11 years and today marks yet another anniversary of her debut in the industry. The actress felt really emotional having embarked on this journey and reaching these levels. To celebrate the same, she took to Twitter to thanks everyone for their support. Samantha Akkineni and R Madhavan’s Pairing in This Commercial Will Make You Want Them Feature in a Film Soon.

Samantha looked pretty as ever in this video where we see her wearing an oversized white shirt and a pair of denim jeans. She begins the video by saying that cinema has always been her first love and is so grateful to be a part of it. She continues to wish herself a 'Happy Anniversary' and then wishes her fans who have supported her throughout these 11 years. She added that there are still so many memories she has to make on sets and is looking forward to it. She concludes by saying that these 11 years in the industry have been very special for her.

She went on to tag her husband Naga Chaitanya and her first director Gautham Vasudev Menon for all the support and the push. She had worked with the two in Ye Maaya Chesave, her debut film. Mentioning Gautham, she wrote, "Thank you for seeing something in me deeply..something that I really didn’t see in myself." She added that she feels like the happiest woman in the world for receiving so much love from everyone.

#11yearanniversary Thankyou @menongautham for seeing something in me🙇‍♀️..something that I really didn’t see in myself.. Thankyou @ManjulaOfficial 🤗 and Thankyou @chay_akkineni ❤️.. and Thankyou to all of you reading this .. you have made me the happiest woman in the world pic.twitter.com/33mhB49IcL

Samantha's Mahanati co-star Keerthy Suresh also wished the actress with a sweet post. She shared a poster that had the popular characters that Samantha played in her films including her roles in Jaanu, Seema Raja, Theri, Majili and Rangasthalam. Keerthy Suresh wrote, "Congratulations on an illustrious career that’s spanned across 11 years @Samanthaprabhu2 It’s been a pleasure watching you grow as a person, an entrepreneur and an artist! To many more years of success and brilliance!" The Family Man Season 2: Samantha Akkineni Says She Has Broken a Lot of Rules for Manoj Bajpayee’s Amazon Prime Show.

Earlier, Samantha Akkineni shared a New Year surprise for all her fans when she announced her new film with Gunasekhar. The title of Samantha’s new film is Shaakuntalam, written and directed by Gunasekhar. It’s a mythological film in which Samantha would be seen as the leading lady. Apart from this, Samantha will also be seen in Manoj Bajpayee starrer web show titled The Family Man 2.

(The above story first appeared on LatestLY on Feb 26, 2021 04:07 PM IST. For more news and updates on politics, world, sports, entertainment and lifestyle, log on to our website latestly.com).