It was recently confirmed that Vijay Sethupathi would be portraying the role of former Sri Lankan cricketer Muthiah Muralidaran in his biopic that has been titled has 800. 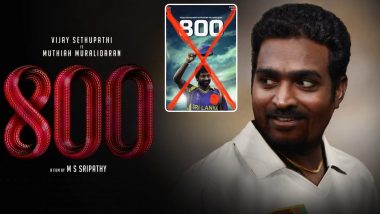 It was recently confirmed that Vijay Sethupathi would be portraying the role of former Sri Lankan cricketer Muthiah Muralidaran in his biopic that has been titled has 800. The makers released the motion poster that showed the Kollywood superstar’s uncanny resemblance to the Muralidaran. While many praised this new avatar of Sethupathi, some ever even left disappointed and it was not anything related to his look or the motion poster. Muthiah Muralidaran Biopic: Vijay Sethupathi To Play The Titular Role In MS Sripathy’s Directorial (View Poster).

Vijay Sethupathi is facing the wrath of netizens because he signed up for role of the Tamil-origin cricketer Muthiah Muralidaran who never took a stand for the country’s Tamil population in the past after the numerous atrocities that the Sri Lankan government is said to have inflicted on them, reports IANS. Fans are talking about his controversial stand over Sri Lanka government and the Liberation Tigers of Tamil Eelam. Netizens used the hashtag #ShameOnVijaySethupati and expressed their anger against Vijay Sethupathi. There are many who have demanded a boycott on this film as well as the actor. 800 Motion Poster: Vijay Sethupathi Plays Sri Lankan Cricketer Muttiah Muralitharan and You'd Be Surprised by the Uncanny Resemblance (Watch Video).

Unhappy With This Biopic

Murali is a tamilan but he represent srilanka & Srilankan. We have lot of cricketing legends in our country then why making srilankan player biopic. pic.twitter.com/PwFzuYL6V3

Muthiah Muralitharan is a very admirable and lovable man - VijaySethupathi

The Sinhala Government has massacred two lakh Tamils ​​in Eelam. There is no other proof than this that #VijaySethupathi can not feel this pain!#ShameOnVijaySethupathi#Tamils_Boycott_VijaySethupathi pic.twitter.com/z5ZmehORq0

The flag that kills thousands of Tamils, give death threats, treat the minorities as second class...what an audacity that @VijaySethuOffl is proud to bear that blood stain flag on his chest. You are a sell out.#ShameOnVijaySethupathi #BoycottVijaysethupathi pic.twitter.com/tlGIGxPJqQ

800 is directed by MS Sripathy and will be produced under the banners of Movie Train Motion Pictures and Dar Motion Pictures. When the makers had made an official announcement about this biopic, Vijay Sethupathi had shared a post that read, “Honoured to be a part of this landmark project.”

(The above story first appeared on LatestLY on Oct 14, 2020 02:33 PM IST. For more news and updates on politics, world, sports, entertainment and lifestyle, log on to our website latestly.com).