Akshay Kumar's OTT Debut on Amazon Prime Gets Delayed, Show Will Now Release in the Second Half of 2021

While we wondered if his show was put on a back burner considering his steady film announcements, a new report suggests it has been delayed but not shelved definitely. 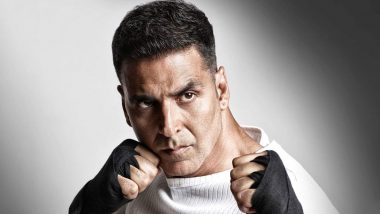 Remember the time when Akshay Kumar had set himself on fire? Yes, the day he announced his digital debut with, The End on Amazon Prime. Well, the same show was earlier supposed to start shooting this year but the ongoing coronavirus pandemic has compelled the makers to shift their schedule and make way for Akshay's prior commitments. While we wondered if his show was put on a back burner considering his steady film announcements, a new report in an entertainment portal suggests it has been delayed but not shelved definitely. Laxmmi Bomb on Disney+ Hotstar: Akshay Kumar Unveils Intense New Posters Ahead of the Film's OTT Release (View Pics).

The show's producer, Vikram Malhotra was recently asked about an update on Akshay's upcoming show. While explaining the reason for its delay, he said, "It isn't a project that we, as makers, can tweak and start (shooting) next month. We've used the time to improve the material." When asked about the change in the show's shooting schedule, he said, "The show was to roll in December tentatively, with Akshay joining us in January 2021. But, it has been four months (into the lockdown), and it will be a few more months before normalcy is restored. Akshay, too, has other commitments. So, we are hoping to get into production by the second half of 2021." That's definitely a long wait for his fans but he has a steady lineup ready nonetheless. Akshay Kumar Lauds Move to Open Positions for Transgenders in Paramilitary Forces in India, Hopes Other Occupations Will Follow Suit.

While Akshay had announced his digital debut with Amazon Prime, he'll end up making one on Disney+ Hotstar instead. The actor's next release, Laxmmi Bomb with Kiara Advani is set for an OTT premiere and reports are rife that it's hitting the digital space in September 2020. Probably on his birthday, September 9. Let's wait and watch if he's

(The above story first appeared on LatestLY on Aug 02, 2020 08:32 PM IST. For more news and updates on politics, world, sports, entertainment and lifestyle, log on to our website latestly.com).