Bharti Singh Shoots for The Kapil Sharma Show, Rubbishes Speculations of Her Dismissal by the Makers (View Pics)

Well, Bharti Singh is still part of The Kapil Sharma Show! It was rumoured that Bharti was ousted from TKSS after her name got embroiled in the ongoing drug case. The comedienne has resumed the shoot and dismissed the speculations in style. Check it out. 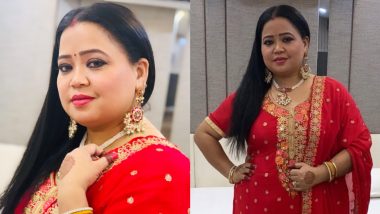 Bharti Singh and Haarsh Limbachiyaa made headlines when the two were arrested by Narcotics Control Bureau (NCB) for consumption and possession of cannabis (ganja) in the ongoing drug probe. The said drug was found at their residence in Mumbai. However, later on, the two were granted bail. Not just this, rumours also started doing rounds that Sony Entertainment TV was with the thought of removing Bharti from The Kapil Sharma Show following her name in the drug mess. But seems like that’s not the case, as the comedienne has rubbished these rumours in style. The Kapil Sharma Show: Bharti Singh Confirms That Team Will Not Start Shooting This Month (Details Inside).

Bharti took to social media and posted a picture of herself claiming that she is finally returning to TKSS and is all set to shoot for an upcoming episode. In the pics, Singh was seen dressed in a traditional red attire looking pretty as always. She captioned the post as, “Red is the colour of Bonding of 2 Hearts. #kapilsharmshow every sat-sun 9.30pm (sic)." Well, now that’s how you set the record straight. Bharti Singh No Longer Part of The Kapil Sharma Show? Co-Star Krushna Abhishek Has This to Say on Rumours.

We are loving Bharti’s sass here. Right from attending the wedding of Aditya Narayan-Shweta Agarwal to also dancing on the beats of dhol at choreographer-actor Punit Pathak wedding in Lonavala with her husband Haarsh, she has literally turned her carefree mode on. Well, now we are waiting for Bharti Singh’s episode of TKSS to sir soon. Stay tuned!

(The above story first appeared on LatestLY on Dec 15, 2020 09:06 AM IST. For more news and updates on politics, world, sports, entertainment and lifestyle, log on to our website latestly.com).