Tonight's episode of Bigg Boss 14 will be an explosive one for sure, you know why? Because Bigg Boss 13's legendary brawler Sidharth Shukla will now lock horn with Bigg Boss 7 winner Gauhar Khan. 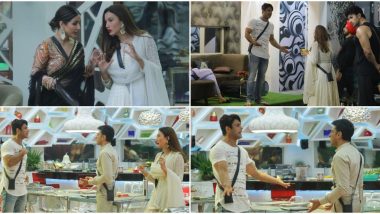 Tonight's episode of Bigg Boss 14 will be an explosive one for sure, you know why? Because Bigg Boss 13's legendary brawler Sidharth Shukla will now lock horn with Bigg Boss 7 winner Gauhar Khan. The first task of the show, the Jewel Thief in introduced wherein the contestants (Freshers) will need to impress the three Seniors by winning pieces of jewelry from them. And let us tell you, this task ends up being full on 'kalesh' and 'tabahi'. And for those of you who weren't able to catch tonight's literally explosive episode, here are the top highlights of tonight's episode. Bigg Boss 14 October 5 Episode: From Rubina Being The 'Nirasha Janak' Contestant to Sara Calling Sidharth ‘Jija’, 5 Must-Read Highlights From Day 2 of the Reality Show!.

Bigg Boss keeps it simple. For the first nominations of the house, nominates everyone but.... the entire week the contestants will be given tasks where they will get opportunities to save themselves from the nominations and get one step closer to being confirmed. Diet Sabya Calls Out Bigg Boss 14 Contestant Nikki Tamboli for Copying Kendall Jenner's Redemption LBD (See Pic).

The first task of Bigg Boss 14 sees Hina and Gauahar play queens and the male freshers will try to impress the queens and get jewellery in return. However, Sidharth and the girl freshers will be given the role of the 'Choron ka Sardar'.

While Sidharth's team steals jewellery even before Hina and Gauahar enter then kabilas, what follows is Sidharth reprises his Bigg Boss 13 days and ways and ends up stealing the jewellery by force, that does not sit down well with Gauahar. While Gauahar believes that a task has to be conducted within all rules, Sidharth believes he has done his bit and strategised. All this while Hina Khan watches the drama from the sidelines with Season 7 and Season 11 winners engage in a ward of words. They eventually make peace.

Eijaz Khan Lashes Out at Sidharth

While Sidharth and Gauahar Khan keep at it, Eijaz, who has so far been a silent spectator, lshes out at Sidharth. He accuses the BB13 winner of not letting the guys of the house conduct the task and give a chance of performing the task.

Abhinav Shukla Wins The Task And Gets Immunity

When Eijaz and Abhinav try to convince Rahul to hand over his jewellery to Abhinav who has the maximum ornaments, he refuses. This irks the boys and Nishant and Abhinav are seen discussing how Rahul's true face has now come to the fore. After the task ends, Abhinav is declared the winner as he has the most jewellery and is declared immune from evictions this week.

The episode ends on a lighter note with Jasmin Bhasin crying over her wrong judgement of detergent while leaves her clothes full of soap and Rubina, Abhinav and Sara laughing over her childish antics. Sidharth and Nikki seem to start a love story with the lady stating she wants to marry Sidharth. Shehnaaz are you listening?

Wasn't tonight's episode of the show exciting, explosive, intense and sweet all together? These were the highlights of day 3 of Bigg Boss 14 on October 6, 2020. In the preview of the next episode, we'll see Bigg Boss make best performer Abhinav Shukla choose between retaining his immunity and bringing wife Rubina into the house. Edge of the seat, isn't it?

(The above story first appeared on LatestLY on Oct 07, 2020 12:07 AM IST. For more news and updates on politics, world, sports, entertainment and lifestyle, log on to our website latestly.com).