As the prolific actor, Dilip Joshi celebrates his birthday today (May 26), we take a look at some of his TV shows other than Taarak Mehta Ka Ooltah Chashmah that were also famous and how. Read on. 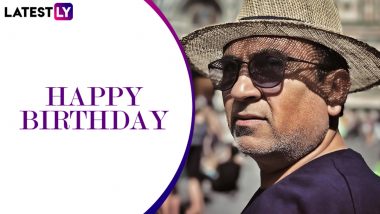 Dilip Joshi celebrates his birthday today (May 26). The versatile actor who has been part of showbiz since 1989, rose to fame by playing Jethalal in SAB TV’s comedy TV serial, Taarak Mehta Ka Ooltah Chashmah. Over these years, he has carved a niche for himself in the small screen space, as audiences love his comic timing in TMKOC. However, this is not the only famous show the actor has been part of in his career. As before making it big as Jethalal, he has starred in many TV shows which we bet you are unaware about. And so, as he turns a year older today, here are five serials of the actor, other than Taarak Mehta. Dilip Joshi Birthday Special: Lesser-Known Facts About the TMKOC Actor That We Bet You Didn’t Know!

Sony TV’s this show featured Dilip Joshi as a jobless guy named Vasu, staying with his sister and her husband. In this one, the actor had won audiences hearts with his hilarious comedy.

Dilip Joshi played the lead role in this television show which used to air on Sahara Manoranjan Channel. The story of this one revolved around five individuals seeking love and marriage.

This serial aired on Star Plus and was a hit, thanks to its stellar cast. Dilip Joshi played the role of Taneja, where the plot of this kids drama surrounded around seven orphaned children. Dilip Joshi's Daughter Neeyati Gets Married; Taarak Mehta Ka Ooltah Chashmah Actor Shares Their Lovely Wedding Pics With an Emotional Note!

This comedy show was produced by JD Majethia and Aatish Kapadia. Starring comprised of Siddharth Randheria, Dilip Joshi, Dimple Shah, and Nimisha Vakharia in key roles, this show was one of the best sitcoms during its time.

That’s it, guys! These are some of the most popular shows of the versatile actor Dilip Joshi, before he became a part of TMKOC. Indeed, he is an actor who inspires many to dream big. Happy birthday to him. Rise and shine!

(The above story first appeared on LatestLY on May 26, 2022 08:10 AM IST. For more news and updates on politics, world, sports, entertainment and lifestyle, log on to our website latestly.com).