Gossip Girl reboot reviews are trickling in and critics haven't been too kind. Many have called it just changing Instagram filters while others believe it's quite catchy for a show which shouldn't exist. The series is streaming on HBO Max. 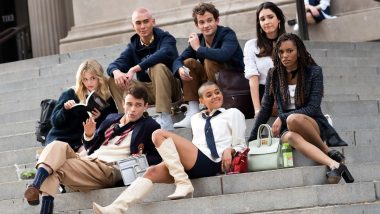 Gossip Girl was reincarnated with a new cast that isn't all white. While the diversity angle worked for the look and feel of the show, the story couldn't take off at all. The reviews are trickling in and critics haven't been too kind. Many have called it just changing Instagram filters while others believe it's quite catchy for a show which shouldn't exist. We have compiled a few of the critics' reviews below to give you an idea of what to expect when you decide to catch up with the new lot of Gossiping boys and girls from the upper east side. Gossip Girl Reboot Teaser: Upper East Siders Gear Up for New Scandals, Rumours and More (Watch Video)

The Hollywood Reporter: HBO Max’s reboot of Gossip Girl is a half-bland rehash of the soapy beats from the original series and half perplexing but semi-ambitious premise-overhaul that the series isn’t prepared to fully engage in. More than anything, this new Gossip Girl just feels behind the curve, a meek attempt to keep pace with shows like HBO Max’s Generation or Netflix’s Elite — shows that never would have existed in the first place without Gossip Girl.

Entertainment Weekly: This Gossip Girl simply isn't nasty enough. Sure, characters vow to exact revenge on their frenemies multiple times an episode, but so far, all the détentes end with poignant personal epiphanies. ("I am a bully!") The original allowed the awful characters to own their awfulness. (Blair: "You're disgusting." Chuck: "Yes, I am.") Here, everyone's always apologizing.

USA Today: While CW's "Gossip" wasn't always well written, it was unfailingly entertaining; HBO Max's version rarely falls into that second category. It's a cringe-worthy slog, full of unappealing acting, atrocious writing and plot twists that verge on the sociopathic. There is something so pathologically deranged about the reboot that it inevitably will win some fans. They'll come for their flaws, for the messy narrative, humorously bad acting and absurd plot twists. But this is not the kind of show that deserves acclaim for its inanity. Gossip Girl Trailer: A Threesome And A Whole New Bunch Of Rich Kids Are Back On The Radar But It Lacks Punch (Watch Video)

(The above story first appeared on LatestLY on Jul 09, 2021 06:14 PM IST. For more news and updates on politics, world, sports, entertainment and lifestyle, log on to our website latestly.com).