Khichdi Written Episode Update, May 5, 2018: Hansa Lands up in Prison And The Police Just Strive to Give Her Bail

Hansa instigated by Babuji now wants to drive a car 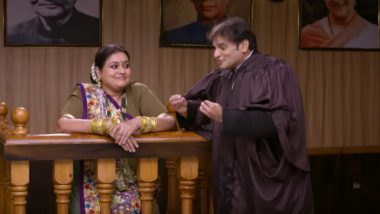 Today's episode of Khichdi  starts with Jayshree relating to Baa the sad incident where Praful was sent to the ATM so he can withdraw money for Hansa's bail. Praful ends up explaining to poor Babuji that he did withdraw money and that is Rs. 300. Babuji tries to understand why he withdrew 300 when he was supposed to withdraw 10000. Praful relates that he just had 300 in his pocket so that is all he could withdraw. As usual Babuji is left seething as Praful calls him a liar when he says he had asked him to put the card in the machine and then take the money. The inspector wants the money at the earliest so he can send Hansa away as the inmates are in a real bad state with her around. Himanshu brings in a box of shoes that cost him 12000 and asks the inspector to set Hansa free and also give him 2000 back.

Jayshree calls and says that she would get the money and that she is on the way. Now Jayshree continues her story to Baa as she tells her how they met with the accident. Now it happened that the Parekh family was off to attend a wedding and as usual Babuji was pushing the car. Hnasa says that they shoudl exchange Babuji for a better father-in-law. This leaves Babuji fuming as he asks Hnasa to get down and push. Hansa retorts asking Babuji to first learn to push and then talk about driving. Now as it would Babuji ends up asking Hansa to drive. Hansa takes it as a challenge and Himanshu promises to teach his sister. After a lot of Himanshu like teaching where Hansa says that she needs beer to drive a car, Jayshree takes it upon herself to get Hansa driving.

Jayshree  almost gives up when she cannot even teach Hansa how to open the car door. Later though she manages to get Hansa behind the wheel. Driving away Hansa runs over a boy. The boy cannot walk anymore and so now Babuji has his imagination running wild as he thinks of Hansa in the jail as she finally manages to create havoc in there and also gets babuji to confess to the crime. The police decide to keep watch on the house as they know Jayshree will help Hansa run away. Now the plan is thus- Praful has a heart attack and Hansa is dressed as the doctor who just has one dialogue and that is Praful needs a bypass. They know one new english word can ruin the entire disguise and decide that they will not speak in english. Hansa promises that if the inspector speaks in english she will ignore it and just repeat her dialogue.

The disgusie though goes for a toss as Jayshree ends up speaking the formidable english word and Praful sits up to explain. Now Hansa is arrested and presented in court. The Parekhs defend Hansa and the judge too looks pretty confused. The lawyer is tired as he sees the entire proceeding is going nowhere. Finally though it is revealed that nothing happened to the boy and it was just their trick to get insurance. Hansa is left with warning. Later Himanshu teaches his sister to fly a plane.

(The above story first appeared on LatestLY on May 05, 2018 11:53 PM IST. For more news and updates on politics, world, sports, entertainment and lifestyle, log on to our website latestly.com).