The Kapil Sharma Show: Salman Khan Will Be the First Guest on the Comedian’s New Show 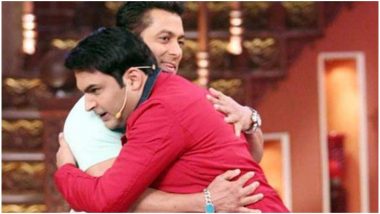 The first episode of The Kapil Sharma Show will also feature Salman's brothers Sohail Khan and Arbaaz Khan; Not only them but also Salman's father Salim Khan, read a statement. Also, Kapil will be hosting the show while his  original team, which comprises his friend Chandan, Kiku Sharda and Sumona Chakravarti will leave no stone unturned to make the show big and interesting. According to a report in IANS, the audience will also get to see comedians Bharti Singh and Krushna Abhishek along with Rochelle Rao on Kapil's show.

While Kapil had taken to the micro blogging site to announce his return to the small screen. He wrote, "Jalad wapas aa raha hoon ‘The Kapil Sharma Show' lekar aap ke liye sirf Sony TV par (I am returning with 'The Kapil Sharma Show' soon only on Sony Entertainment Television)," Sony TV's official spokesperson too said in a statement, "Kapil Sharma is coming home to Sony Entertainment Television with his highly successful weekend comedy show. We are delighted and looking forward to again collaborate with Kapil and his absolutely talented creative team and actors." Watch this space for further updates.

(The above story first appeared on LatestLY on Dec 06, 2018 09:19 AM IST. For more news and updates on politics, world, sports, entertainment and lifestyle, log on to our website latestly.com).