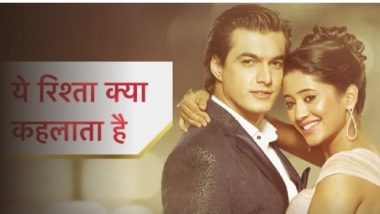 The popular television show Yeh Rishta Kya Khelata Hai has completed 3,000 episodes, and the cast celebrated the feat by sitting down together to watch the show. The saas-bahu drama had gone on air on September 11, 2008. The show has witnessed a lot of changes over 11 years. It begun with the story of Akshara and Naitik, played by Hina Khan and Karan Mehra, respectively. Yeh Rishta Kya Kehlata Hain: Shivangi Joshi and Mohsin Khan Starrer Marks 3000-Episode Milestone With a House Party (View Pics)

"Congratulations to the entire team of 'Ye Rishta Kya Kehlata Hai' I really feel fortunate to be an integral part it and blessed to work with such a great team.. Thankyou Rajan Shahi sir for everything...I will always make you proud," Shivangi wrote. Mohsin feels blessed to be a part of the project.

"First time In the history of Indian Television a show completes 3000 episodes! 'Yeh Rishta Kya Kehlata Hai' team started shooting on 11th September 2008 and exactly 11 years later on 11th September, 2019...we feel SO blessed ! Every single person infront and behind the camera have worked day and night right from the 1st day to make this happen," he added.

(The above story first appeared on LatestLY on Sep 12, 2019 07:09 PM IST. For more news and updates on politics, world, sports, entertainment and lifestyle, log on to our website latestly.com).