CBI team will visit London to attend the extradition case hearing of liquor baron Vijay Mallya on April 26. To recall, Mallya fled to London in March 2016, is wanted in India on charges relating to his defunct Kingfisher Airlines defaulting on loans from various Indian banks amounting to Rs. 9,000 crore. 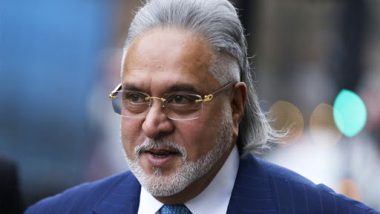 New Delhi, April 24: The Central Bureau of Investigation (CBI) team will go to London to attend the extradition case hearing of liquor baron Vijay Mallya on April 26. Mallya, who fled to London in March 2016, is wanted in India on charges relating to his defunct Kingfisher Airlines defaulting on loans from various Indian banks amounting to Rs. 9,000 crore. The trail will be held in Westminster Magistrates' Court of London.

India's case to bring back the 61-year-old businessman will be represented through the Crown Prosecution Service (CPS) of the British government as per earlier news reports. Special Director Rakesh Asthana from Indian CBI would lead the team over there.

According to news reports,  Mallya during his numerous court appearances in London stated that he had 'done nothing wrong' and described the allegations against him as 'fabricated'. On contrary, the CPS, who argued on behalf of the Indian government stated that the Indian authorities foresaw this as an issue (duping public money) and therefore has been 'engaged on the matter'.

The extradition trial is to be presided over by Judge Arbuthnot.  If the judge rules in favour of the Indian government at the end of the trial, UK Home Secretary Amber Rudd must order Mallya's extradition within two months. However, it’s also been assumed that the extradition process would delay as it will go through a series of court appeals before the actual  order been issued.

India and the UK have an Extradition Treaty dating back to 1992, but so far only one instance has taken place from the UK to India. Samirbhai Vinubhai Patel, wanted in connection with the post-Godhra riots of 2002, was extradited, but, unlike Mallya, he had submitted to the order without a legal challenge.

Mallya, who is based at his Hertfordshire estate called Ladywalk in the village of Tewin, around 48 kilometres from London, had denied, on being formally asked in court if he consented to being extradited to India on the charges relating to allegedly defaulting various bank loans.

(The above story first appeared on LatestLY on Apr 24, 2018 01:01 PM IST. For more news and updates on politics, world, sports, entertainment and lifestyle, log on to our website latestly.com).