Delhi Shocker: Man Stabbed to Death Outside Liquor Shop by 3 Men For Refusing to Give His Beer to Them; Accused Arrested

A 22-year-old youth has been stabbed to death by three men after the former refused to give them beer, an official said on Wednesday. 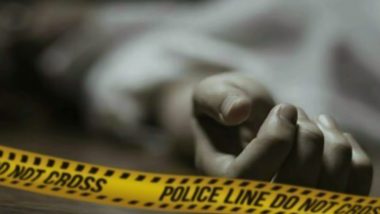 New Delhi, June 1: A 22-year-old youth has been stabbed to death by three men after the former refused to give them beer, an official said on Wednesday.

DCP (northwest) Usha Rangnani said a PCR call was received at Adarsh Nagar police station on May 29 around 11 p.m. regarding an injured person lying in a pool of blood near Vardhman Mall, GTK Road, Azadpur. Tamil Nadu: 26-Year-Old Man Charged With Murder of His Maternal Uncle in Coimbatore

The police immediately reached at the spot and the injured, identified as Durgesh Shukla, was rushed to BJRM Hospital where he was declared brought dead.

On inspection of his injuries, the doctor said that he had a single stab injury on his left side of ribs which seemed to have punctured the heart. Maharashtra: 26-Year-Old Man Arrested in Connection With Minor’s Murder in Pimpri-Chinchwad

Accordingly, a case under section 302 of the IPC was registered in Adarsh Nagar police station and investigation taken up.

During investigation, the police examined several CCTV footage in the vicinity of the crime spot and all the three accused were arrested from different locations of the city.

The three accused disclosed that on May 29, they came to Azadpur from Mukundpur at about 8 p.m.

Later, they began roaming at the GT Road in an intoxicated state.

At around 10.45 p.m., when they were present at service road in front of Vardhman Mall, they saw Durgesh Shukla coming from the Mall side, carrying a plastic bag containing beer bottles.

They asked him to give them the beer bottles but he refused which led to a fight. Things soon escalated, and Brijesh and Himanshu caught him while Ankit stabbed him on his chest.

(The above story first appeared on LatestLY on Jun 01, 2022 10:30 PM IST. For more news and updates on politics, world, sports, entertainment and lifestyle, log on to our website latestly.com).