The Ghazipur police have withdrawn the orders issued by two police stations, asking petrol pumps to stop giving fuel to tractors, in view of the proposed tractor rally on January 26 as part of farmers' agitation. 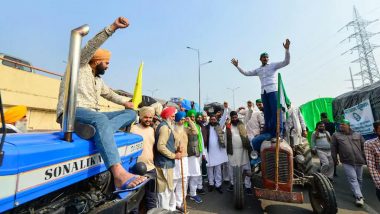 Ghazipur, Jan 25: The Ghazipur police have withdrawn the orders issued by two police stations, asking petrol pumps to stop giving fuel to tractors, in view of the proposed tractor rally on January 26 as part of farmers' agitation.

The Samajwadi Party had shared a news report on Twitter that said farmers are being kept under house arrest by the UP Police in order to restrain them from participating in the January 26 tractor rally. Farmers' Protest: Barricades to Open on January 26 As Delhi Police Gives Permission For Tractor Rally; Farmers Allowed to Enter Upto 100 Km Within National Capital.

Superintendent of Police, Ghazipur Om Prakash Singh, said he was shocked when he learnt about the orders issued by the in-charges of the Suhwal and Saidpur police stations and has asked ASP (rural) to probe the matter. He also made it clear that no such restrictions have been imposed in the district.

The SP said he had issued directions to ensure movement of fully fit tractors on roads, especially highways, to prevent accidents in view of the ongoing Road Safety Month, but this order was misinterpreted by cops of the two police stations.

Police officials at Suhwal police station issued an order asking petrol pumps not to give fuel to tractors.

This order stated, "In view of January 26, high alert has been sounded in state and prohibitory orders under Section 144 Cr.PC are effective. In view of the possibility of farmers taking out tractor rallies, a ban is imposed on movement of tractors. You are directed to stop giving oil to tractors, in drums or containers from January 22 till 26 in order to maintain peace."

The Saidpur police, on the other hand, imposed complete ban on movement of tractors on the highway till January 26.

Saidpur inspector started issuing notices to tractor owners mentioning that in view of national festival, flag marches and movement of school children on roads, movement of tractors will not be allowed. If any tractor is found on road during checking as part of road safety week, legal action would be initiated against them.

The matter came to light after the Samajwadi Party wrote on Twitter that, "To stop the Farmers' tractor parade, which will take place on January 26, the BJP government is keeping the farmers of Purvanchal under house arrest and stopping petrol pumps from giving diesel to them. In the greed of corporates, the blind government is doing all sorts of atrocities on the Annadata."

(The above story first appeared on LatestLY on Jan 25, 2021 09:17 AM IST. For more news and updates on politics, world, sports, entertainment and lifestyle, log on to our website latestly.com).