IAF Chopper Saves Man From Getting Washed Away by Heavy Water Flow at Khutaghat Dam in Chhattisgarh; Watch Video

In a video shared by ANI, the IAF chopper is seen rescuing a man at the Khutaghat Dam near Bilaspur in Chhattisgarh. Dipanshu Kabra, IG Bilaspur Range informed that due to heavy flow in the dam, IAF was requested to carry out a rescue operation. 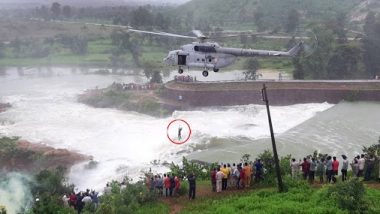 Taking to Twitter, the Bilapur Police shared the photos of the rescue operation that was carried out by the IAF. It lauded the efforts by Police administration, the locals and the State Disaster Response Fund (SDRF) and others who tried to save the man's life since last night. The tweet reveals that the man was stuck in the water body since last night. Jammu: IAF Saves Two Men in Daring Rescue Operation After They Got Stranded in Overflowing Tawi River, Watch Video.

"Big Salute to Indian Airforce for launching rescue operation on our request in such adverse weather condition. Applause for Bilaspur police, admn, sdrf, ntpc, secl, local public who kept on trying to rescue him throughout last night, and kept hope alive in him", the tweet read.

On Sunday, the IAF had carried out a massive rescue operation in Telangana. The incident took place in Kundanpally village of Jayashankar Bhupalpally district where after 10 farmers were left stranded in the floodwaters. Two  IAF helicopters were pressed into service to save the farmers.

(The above story first appeared on LatestLY on Aug 17, 2020 10:10 AM IST. For more news and updates on politics, world, sports, entertainment and lifestyle, log on to our website latestly.com).