India Has 70% of the Total Tiger Population of the World, It Is One of Our Soft Powers, Says Prakash Javadekar 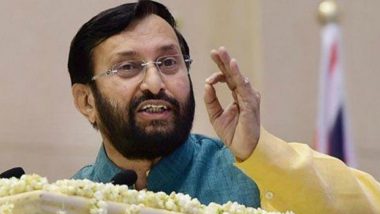 New Delhi, July 28: Prakash Javadekar, Minister of Environment, Forest & Climate Change on Tuesday said that India has 70 percent of the total tiger population of the world and the nation should be proud of it. Javadekar said that Tigers and other wild life are a kind of soft power India has to show on the international front. Giving details about the statistics of wildlife in India,  Javadekar said that India has 30,000 elephants, 3000 one-horned rhinos and more than 500 lions. The Minister said, despite several constraints such as less land mass, India has eight percent of bio-diversity because our country has a culture of saving and preserving the nature, trees and its wild life.

India has 70% of the total tiger population of the world. India should be proud of it. This is one of our soft powers. We have 30,000 elephants, 3000 one-horned rhinos and more than 500 lions: Prakash Javadekar, Minister of Environment, Forest & Climate Change pic.twitter.com/6GGpz39QEs

The Guinness World Records website said, "The fourth iteration of the survey – conducted in 2018-19 - was the most comprehensive to date, in terms of both resource and data amassed. Camera traps were placed in 26,838 locations across 141 different sites and surveyed an effective area of 121,337 square kilometres (46,848 square miles)".

Reports informed that in total, the camera traps captured 34,858,623 photographs of wildlife (76,651 of which were tigers and 51,777 were leopards; the remainder were other native fauna).

(The above story first appeared on LatestLY on Jul 28, 2020 01:13 PM IST. For more news and updates on politics, world, sports, entertainment and lifestyle, log on to our website latestly.com).