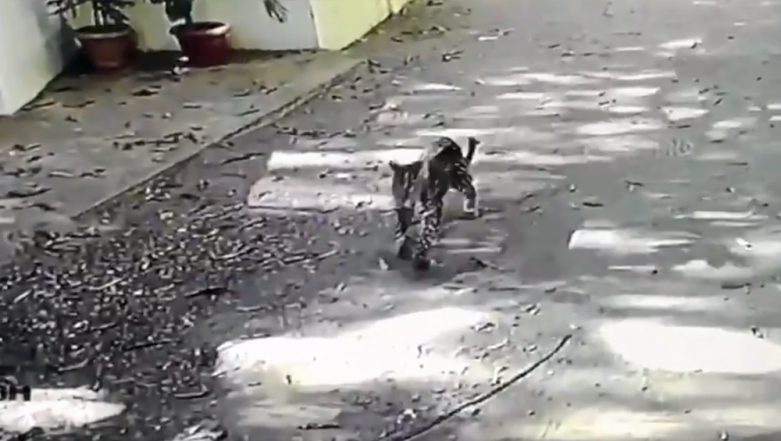 Mumbai, April 1: A leopard was seen entering a crowded locality in Mumbai's Andheri area on Monday, causing panic among the local residents. A resident of Andheri tweeted a video saying that a  leopard entered the residential building in Woodland crush area at Marol Vijaynagar in Andheri east locality. According to reports, the big cat was found sleeping underneath a vehicle near the residential complex. According to a tweet  by ANI, a team of Forest department is present at the spot and operation to rescue the wild cat is currently underway.

It must be noted that the area where the leopard was spotted on Monday is just  100 meters away from the boundary of Goregoan's Aarey Colony.  According to a recent study, there are 47 leopards in the Sanjay Gandhi National Park in Borivili. Leopard Spotted Walking in Thane’s Korum Mall, Search Operation Underway; Watch Video.

In the recent past, there have been several incidents of leopard straying across the city. Leopard sightings are not surprising in areas including Andheri, Goregoan and Thane as it is close to Aarey Colony and Sanjay Gandhi National Park respectively which has a wide forest patch.

In February, Thane's Korum Mall had an unusual visitor- a leopard. The wild cat was caught on camera loitering around the mall. After forest officials launched a hunt for the big cat in nearby neighbourhoods, it was caught after a six-hour-long search operation.