Marking another achievement, the Gadchiroli police have nabbed two most wanted Maoists, both carrying a reward of Rs 2,00,000 each disguised as civilians, during a covert operation, an official said here on Thursday. 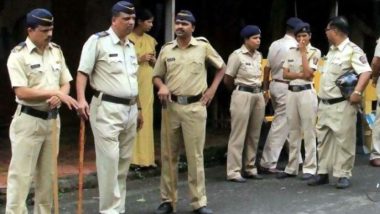 Maharashtra, October 28: Marking another achievement, the Gadchiroli police have nabbed two most wanted Maoists -- carrying a reward of Rs 2,00,000 each -- disguised as civilians, during a covert operation, an official said here on Thursday. They are Muda Masa Zohi, 32 and Mainu Dorpeti, who were participating as civilians during a rally of local villagers opposing the Surjagad Mining Project, said Superintendent of Police Ankit Goyal.

While Zohi is an Action Team Member, Dorpeti is a Jan Militia activist and both have serious cases lodged against them. Following reliable intel that a group of Maoists masquerading as villagers may infiltrate the rally on October 26, the Gadchiroli police deployed its own force members in plainclothes to detect them. After successfully identifying them from the crowds, the covert police teams guided by the top officers like Somay Munde, Sameer Shaikh, Anuj Tare, managed to trap and arrest them, said Goyal.  Maoist Leader Killed by Rival Gang Members in Hazaribag.

As per his records, Zohi was directly involved in the bloody encounters at Zarewada (February 27, 2019), Bodmeta (March 15, 2020), Koparshi (March 4, 2021), and other serious offences. Dorpeti was personally linked with the brutal killing of one villager Somaji C. Sadmek on the Hedri-Surjagad Road on September 19 (2021), attacks on a security post in Gatta on May 11, and other major crimes. Considering their series of violent acts and other offences, the Maharashtra Police had announced a reward of Rs two Lakh each on their heads, Goyal added.

(The above story first appeared on LatestLY on Oct 28, 2021 04:55 PM IST. For more news and updates on politics, world, sports, entertainment and lifestyle, log on to our website latestly.com).