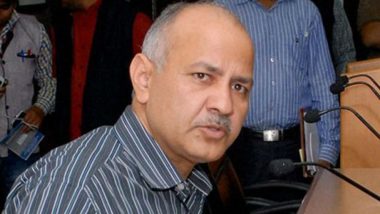 New Delhi, September 14: Delhi Deputy Chief Minister Manish Sisodia was confirmed to have contracted COVID-19, as per his test results that were released on Monday. The senior Aam Aadmi Party (AAP) leader decided to undergo the coronavirus test after suffered from a mild fever. Manish Sisodia Suffering From Fever, to Skip Delhi Assembly Session.

Sisodia, in a statement issued on social media, said his condition is stable with only a mild fever being felt by him. He would remain in coordination with medics and isolate himself at home, the Deputy CM tweeted.

"I have kept myself in isolation. Right now there is no fever or any other problem, I am completely fine. Soon after getting all your blessings, I will return to work," Sisodia said.

Sisodia, 48, has been at the forefront of Delhi's battle against COVID-19. The Minister was seen visiting several medical facilities and inspecting quarantine centres when the health crisis was at its peak in the national capital. His prediction of 5 lakh cases in Delhi by July reportedly triggered the Centre's intervention.

(The above story first appeared on LatestLY on Sep 14, 2020 07:52 PM IST. For more news and updates on politics, world, sports, entertainment and lifestyle, log on to our website latestly.com).