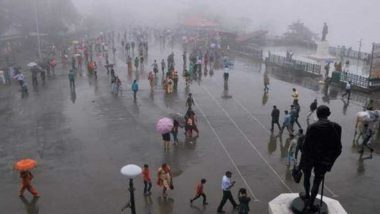 Mumbai, July 13: Heavy rainfall is expected to lash parts of Konkan and Mumbai over the next 48 hours, the India Meteorological Department (IMD) has said. KS Hosalikar, Deputy Director General (DDG), IMD, Mumbai has informed that Mumbai has received isolated heavy rains in the last 24 hours, adding that clouding is seen over South Konkan. Giving a forecast of monsoon for the next 2 days, the official predicted that heavy rainfall will hit Konkan & Mumbai with increased intensity tomorrow i.e. on July 14.

The weather agency has forecast intermittent rains in the city and suburbs "with possibility of heavy falls" at isolated places in the next 48 hours. Earlier this month, heavy rainfall had lashed Mumbai, Thane and other parts of Konkan Maharashtra, causing water-logging in some low-lying areas of the metropolis. The rainfall inundated some low-lying areas of the city, including Hindmata in Central Mumbai, Sion and several areas in Chembur. The arrival of the southwest monsoon was announced in south and coastal Maharashtra on June 11. Monsoon 2020 Forecast: West Bengal, Sikkim, Bihar and Eastern UP to Receive Heavy Rainfall During Next 4 Days, Says IMD.

The IMD has issued an alert saying rain, thundershowers and lightning are very likely to occur today during next few hours in parts of Uttar Pradesh, according to the Meteorological Centre, Lucknow. Meanwhile, heavy rainfall is expected to lash several parts of West Bengal, Sikkim, Bihar and adjoining Eastern Uttar Pradesh during the next four days, the IMD has said.

(The above story first appeared on LatestLY on Jul 13, 2020 09:51 AM IST. For more news and updates on politics, world, sports, entertainment and lifestyle, log on to our website latestly.com).