State-owned OIL said that a survey for assessment of damage for compensation in both Tinsukia and Doomdooma Circle is currently underway. OIL further added saying that so far, a total of 1906 families have been surveyed in this regards. 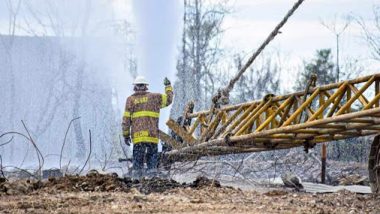 The statement comes a day after three foreign experts, who were involved in the dousing of the well fire, were injured in a massive blast which was reported near Oil India Limited's Baghjan well in Tinsukia district. Reports informed that three of the six foreign experts involved in the operation belonged to a Singapore-based firm. They suffered minor burn injuries while removing a spool from the well head. The locals informed that the blast's sound was so loud that it was heard from a distance of 10 km away.

In its statement earlier, OIL had said that the company was facing continued protests and blockades across many of its wells, leading to heavy production loss since June. It added saying that operations were disrupted in 12 oil and 5 gas wells and the cumulative production loss since May 27.

Here's the statement by OIL:

The oil well at Baghjan in Tinsukia is located around 550 km east of Guwahati. It had been leaking gas along with oil condensate since May 27, 2020. The gas leak had been causing severe damage to the wildlife, thus hampering the overall biodiversity of the region. Earlier in June, OIL Chairman-cum-Managing Director Sushil Chandra Mishra had held discussions with Assam Industries and Commerce Minister Chandra Mohan Patowary and Deputy Commissioner (Tinsukia) Bhaskar Pegu, and appraised the status of the blowout and actions initiated by OIL.

(The above story first appeared on LatestLY on Jul 23, 2020 05:20 PM IST. For more news and updates on politics, world, sports, entertainment and lifestyle, log on to our website latestly.com).