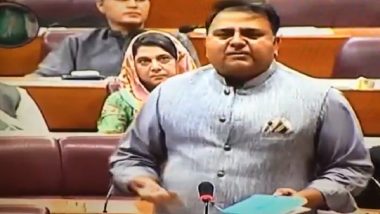 "Humne Hindustan ko ghus ke maara (We hit India in their home). Our success in Pulwama, is an achievement of the people under the leadership of Imran Khan. You and us are all part of that success," Chaudhry said. On February 14 last year, a suicide bomber had rammed an explosive-laden car into a CRPF convoy in Jammu and Kashmir's Pulwama, killing 40 Indian soldiers. Pakistan-based terror group Jaish-e-Mohammad (JeM) had claimed responsibility for the attack. Pulwama Terror Attack: Money Put in Pakistan Bank Accounts of JeM Commander Masood Azhar Before Blast, Confirms NIA.

As per the NIA chargesheet, JeM chief Maulana Masood Azhar, along with his brothers Abdul Rauf Asghar and Ammar Alvi, was continuously giving directions and guidance to the Pakistani JeM militants who had infiltrated into India and were using Pakistani SIM cards, both before and after the 2019 Pulwama attack in which 40 CRPF troopers were killed.

The NIA charge sheet also alleged that the JeM had initially planned the attack for February 6, 2019, but due to heavy snowfall and closure of the highway, the attack was deferred to February 14.

(The above story first appeared on LatestLY on Oct 29, 2020 05:42 PM IST. For more news and updates on politics, world, sports, entertainment and lifestyle, log on to our website latestly.com).