Pulwama Terror Attack: India Remembers 40 CRPF Jawans Who Were Martyred on February 14, 2019 in JeM Strike; Here Is The Complete List of Bravehearts 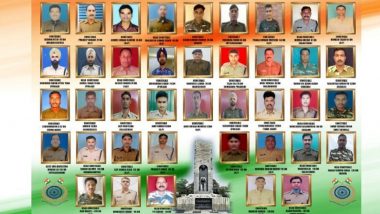 A 20-year-old suicide bomber crashed his SUV packed with explosives into a vehicle part of CRPF convoy on Srinagar-Jammu highway. The suicide bomber Adil Ahmed Dar attacked the CRPF vehicle, which was part of a 78-vehicle convoy. At the time of the attack, around 2,500 CRPF personnel were being escorted for deployment in the valley. Balakot Air Strikes by IAF on JeM Terror Camps Lasted ‘90 Seconds’, Pilots Say Families Had No Clue About Operation.

Here Is A Complete List Of The Martyred CRPF Jawans:

When the convoy reached Lethpora, just 27 km short of Srinagar, the explosive-laden car rammed into the fifth bus from the left side. Another CRPF bus was also damaged in the blast. JeM claimed responsibility for the attack. The terror organisation also released a recorded video statement of Dar. Pulwama Attack: Rahul Gandhi Pays Tribute to Brave Soldiers Who Died in Terror Attack.

Notably, it was the first suicide car bomb attack in Kashmir Valley in the post two decades. In 2001, the Jammu and Kashmir Assembly was attacked in which 41 people, including three suicide attackers, were killed. Pakistan-based terror outfit, Jaish-e-Mohammed claimed responsibility for the attack.

In retaliation to the attack, the Indian Air Force (IAF) carried out surgical strikes on the JeM terror camp in Pakistan’s Balakot. Earlier in the day, Prime Minister Narendra Modi, Home Minister Amit Shah, Defence Minister Rajnath Singh and other political leaders paid homage to the martyrs of the Pulwama attack. PM Modi said that no India could forget the attack on security forces.

(The above story first appeared on LatestLY on Feb 14, 2021 03:19 PM IST. For more news and updates on politics, world, sports, entertainment and lifestyle, log on to our website latestly.com).