The locals took both to the hospital and after she regained her consciousness she admitted to the doctor who was treating her that it was she who did the crime, as she was fed up looking after her husband, which she was doing for the past 15 years. 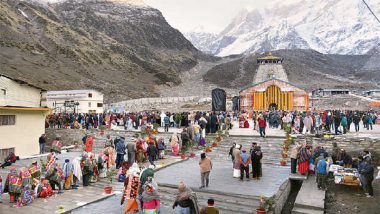 New Delhi, October 19: About 4,000 devotees have returned from Kedarnath out of 6,000 amidst heavy rain in Uttarakhand. The rest of 2,000 pilgrims have been taken to safer places, officials said on Tuesday. Heavy rain for the past three days has wreaked havoc in the Nainital, Haldwani, Kathgodam, Ranikhet, Pauri, Lansdowne, and Chamoli districts of the state. In Kathgodam, the railway track was washed away and fell into the river. The District Magistrate of Rudraprayag said that helicopters have been pressed into service by the Army in the areas affected by heavy rain.

Instructions have been issued to Chamoli and Rudraprayag district administrations to focus on the safety of the stranded pilgrims on the Char Dham Yatra routes. Chief Minister Pushkar Singh Dhami on Tuesday took stock of the situation by conducting an aerial survey of the affected areas along with Disaster Management Minister Dr Dhan Singh Rawat and DGP Ashok Kumar. Uttarakhand Rains: 16 Killed So Far in Rain-Related Incidents, Says CM Pushkar Singh Dhami.

According to the District Magistrate, Pauri, three persons died, while two were injured after a thatched roof collapsed in Lansdowne tehsil. The injured have been rushed to hospital. One person died in Rudraprayag, he said. Tourists are also reported to be stranded at several other places in Uttarakhand. Instructions have been issued to the district authorities to evacuate them as soon as possible.

On Tuesday evening, Chief Minister Dhami reviewed the situation in Nainital after reports that many parts of the district are cut off for road traffic. Due to excessive rain, the road in the Golapar area of Kathgodam was washed away in the river. Train movement has also been affected in Kathgodam. Many trains have been either canceled or terminated before the final destination.

The Chief Minister directed the officials to ensure traffic movement on highways was blocked due to heavy rain and landslides as soon as possible. Special precautions should be taken where there is heavy rainfall, he said. The Chief Minister has been regularly taking updates from all the District Magistrates since Tuesday morning.

He directed the officials to provide financial assistance for loss of life and property expeditiously. The Chief Minister has appealed to the people to remain patient as all necessary arrangements are being made by the government to improve the situation.

(The above story first appeared on LatestLY on Oct 19, 2021 06:54 PM IST. For more news and updates on politics, world, sports, entertainment and lifestyle, log on to our website latestly.com).