International Sex Workers Day 2021: Date, Significance and History of the Day That Marks The Date of Their First Protest Against Police Brutality

International Sex Workers Day is celebrated on 2nd June across the world to draw attention to the systematic violence and discrimination faced by the sex workers at the hands of the law authority. The movement had its origin in Europe but now it's observed around the world. 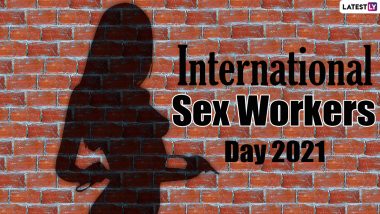 International Sex Workers Day or International Whores' Day is celebrated on 2nd June across the world to draw attention to the systematic violence and discrimination faced by the sex workers at the hands of the law authority. The movement had its origin in Europe but now it's observed around the world.  It is celebrated on 2 June 1975 as   100 sex workers occupied at Sant-Nizier Church in Lyon, France, to express their grief and anger over the exploitative living conditions. The Church was raided by the police forces on 10 June. This day raises awareness of the fact the sex workers are widely discriminated against and are denied access to justice in the aftermath of the violence they might be subjected to in the line of their work.

On 2nd June 1975, hundreds of sex workers occupied the Saint-Nazier church in Lyon, France to protest against the harassment by the police,  fines levied by the law enforcement and to press them to investigate the murders and exploitation of sex workers. The workers banded together to protest for a period of 10 days. However, it was cut short by two days when the protestors were forcibly and violently removed by the police.  The movement garnered global attention, and the support of the community and feminist organisations. The protest spearheaded a movement. It gained International momentum when on On 7th June 1975, Ulla, the leader of the movement told New York Times journalist Clyde Farnsworth, “We are victims of gross injustice. Prostitution is a product of society, and it cannot be changed by a truncheon.” The protest and the widespread attention spurred a movement across the world and thus, 2nd June is known as the International Sex Workers Day.

Sex workers today still face violence and are criminalized for their activity. They are denied benefits and normal due process by the law authority as victims of crime. Each year, when commemorating the International Sex Workers Day,  The Global Network Of Sex Work Projects focuses on the theme of Access to Justice. They aim to increase justice and stop the exploitation of sex workers around the world.

(The above story first appeared on LatestLY on Jun 01, 2021 01:38 PM IST. For more news and updates on politics, world, sports, entertainment and lifestyle, log on to our website latestly.com).