National Pink Day is observed every year on June 23 to celebrate the colour of tenderness and calmness. Read on to know more about the special day. 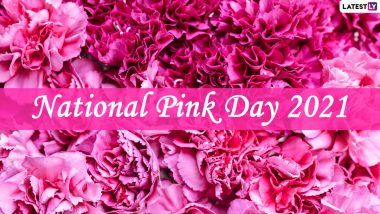 “Whoever said orange is the new pink is seriously disturbed!” – the famously said quote by Elle Woods in ‘Legally Blonde’ is absolutely perfect for those who love the colour ‘Pink’. The pale shade of red is extremely soothing to the eyes when it comes to clothing or buying any useful objects. To celebrate the beauty of the Pink colour, National Pink Day is celebrated on June 23 every year. It is mainly celebrated in the United States of America. This year, it will be celebrated on the same day. As per the National Today report, surveys in both Europe and the United States found that the colour pink is often associated with tenderness, femininity and sensitivity.

There are various shades of the colour Pink such as e blush pink, baby pink, cool pink, dusty pink, and rose. It is said that the various shaded of Pink can have a different effect on the brain. For example, brighter pinks (in plates or boxes) are believed to make the food tastes better and look more appetizing while softer pinks are known to be having more soothing and calming effects on the brain.

History of the Colour Pink

The colour pink was named after a flower of the same name and it is used to describe a shade of pale red. During the 14th century, to decorate something in punched pattern, the world first time used ‘Pink’ as a verb. However, since the Middle Ages, the colour pink had been used in paintings, clothes. Even during the Ancient Times, the colour pink had been described in books. In the 17th century after a Dutch flower of the same shade that was named ‘Pinken’, the word "Pink" was first used to refer to the colour.

National Pink Day is mainly observed in the US to celebrate the tenderness and calmness of the colour pink. The day is also celebrated to raise awareness about Pink causes such as Breast Cancer Awareness and LGBTQ.

However, we often associate pink with femininity but that isn’t always the case. In recent days, men are also incorporating pink in their clothes and accessories.

Now, to celebrate the special day, one can wear the pink colour from head to toe. People can also buy pink flowers and gifts for their loved ones. Here’s wishing everyone a very Happy National Pink Day 2021.

(The above story first appeared on LatestLY on Jun 22, 2021 03:42 PM IST. For more news and updates on politics, world, sports, entertainment and lifestyle, log on to our website latestly.com).